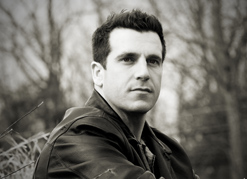 Howdy music aficionados! It’s Andy Gesner and the staff from HIP Video Promo, here to introduce you to one of the Garden State’s freshest independent songwriting voices. Sean Cox is a real rocker at heart, there’s no denying that; on his debut full-length album, he leads his band through thirteen sharply-observed and earnestly-performed songs. But the tracks on Return To Me would be just as affecting if Cox had chosen to record them solo – adorned only by his acoustic guitar and likably-roughnecked vocals. Like the best Turnpike musicians (the singer-guitarist hails from the evocatively-named Millstone, New Jersey), Sean Cox pens blue-collar narratives that are sturdy enough to stand up to a ferocious full-band treatment. Cox and his band have opened for Simple Plan and fit right in; likewise, he’s performed his songs at Garden State coffeeshops and moved folk-rock audiences with his deftly-turned melodies.

Return To Me begins with a rave-up titled “Electricity” and ends with the beautiful “Redemption”; in between, Cox sings of “Secrets”, a “Guardian”, and, tellingly, “Innocence”. “Coming Home”, the penultimate track on the album, is a prime example of Sean Cox at his best: big-hearted, plaintive, earnest, emotionally-evocative, and faithful to the spirit of rock and roll. It’s no ruminative number, though – his band roars through the track with the conviction of true believers. Cox has assembled a flexible, powerful, and road-tested unit: that’s Kevin Hupp (Joan Osborne, Rufus Wainwright) pounding the skins, C.P. Roth (Blessid Union Of Souls) on piano, and Jersey rock veterans Frank Gagliardi and Jeff Norberg on guitars. This summer, they’ll be leaving their usual Northeast haunts behind for a Midwest tour that’ll culminate with a gig at the Play: St. Louis Festival.

Michael Stern of the NYC indie production house Mabus, Inc, is well-known for his mind-warping experimental films, but for the “Coming Home” video, he plays it straight. The Sean Cox clip concerns a subject that we’ve become all too familiar with over the past decade: a soldier returning from combat to his devoted (and nervous) family, and an uncertain future. There’s plenty of footage of Cox in performance, too – and he and his band are energetic, exciting, and arena-ready. But the focus here is rightfully on the story, and it’s a moving and dramatic one: the combat veteran reintegrated into a suburban setting, and his wife and children watching at the kitchen window for his arrival. Director Stern plays with perception – the footage of the family is sped up at times as they frantically prepare the house (and themselves), while the shots of the soldier are slow, reflective, elegiac. He stares out of train windows, thinking perhaps of all he’s experienced, and wondering if it’s unfit him for contemporary society. When he reaches the house, there’s no such ambivalence: his wife embraces him as the clip fades to black.

We’re psyched to be working hand-in-hand with Jersey’s own Sean Cox! He has been gracious enough to supply us with a substantial stock of his new album Return To Me, so don’t hesitate to get in touch with us here at HIP to nab yourself a copy. As always, we’re here for all of your on-air giveaway needs. If you need more info, call Andy Gesner at 732-613-1779 or e-mail us at info@HIPVideoPromo.com. You can also visit www.SeanCox.com to find out more about Sean Cox.