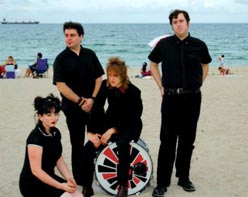 Hello, everybody! It’s Andy Gesner and the staff from HIP Video Promo, here with more great new music and an exciting clip to go with it. When people think about the garage rock revival, they generally envision dank clubs in Detroit or post-industrial Brooklyn. But there’s a great garage rock scene in Southern Florida, too, and The Heatseekers are at the heart of it. With bruising beats and sheets of corrosive guitar, here’s a new band that can go toe to toe with The Mooney Suzuki or The Hives, and hold its own.

Released on up-and-coming Florida indie OHEV Records – a label cutting-edge enough to offer releases from Kind Of Like Spitting and Hot Hot Heat – The Heatseekers’ debut is poised to punch its way out of the Southeast and onto modern rock playlists. In Praise Of… , the band’s punishing debut, is ten tracks of two-fisted blues-rock – relentless, hooky, fast and furious. Aptly named drummer Chuck Loose lays down the Stax-influenced beats, Terra Marie drives the ditch-dirty bass grooves over them, and twin axemen Chris Maggio and Owen McLean add lacerating, distortion-soaked guitar riffs over the top.

“New (Old) Sound” is the first single from In Praise Of…, but all of The Heatseekers’ songs sound like singles. That’s because the group’s aesthetic hearkens back to a time when the 45 was the principal unit of recorded music, and records needed to be immediate, gripping, in-your-face. The song is an pugnacious blurt of riffs, slammed snare and kick drum, and hollered vocals, and it builds from a swamp-blues verse to an explosive singalong chorus. The “New (Old) Sound” of the title is an accurate description of the style: the song is rooted in the Sixties garage rock idiom, but without sacrificing an ounce of aggression, it’s been given a modern-rock, radio-ready sheen.

Director J. B. Carlin (The High Strung) presents The Heatseekers as a whirlwind of rock energy; shouting into antique microphones with conviction and fury. The performance clip finds the band in a warehouse on a frosty day – exercised, the band blows clouds of steam out of their nostrils. If they’re freezing, they barely show it: they’re jumping around so much that it’s hardly noticeable. Their hot pink clothing contrasts sharply with the cool blue light filtering through the warehouse walls. A fire burns in an upended garbage can, and casts an infernal illumination upon the faces of the bandmembers.

Carlin cuts his tape with the same hyperactive intensity as The Heatseekers perform. The video is an amalgam of quick cuts, most of which are tethered to Chuck Loose’s surprisingly swinging drum performance. With each stroke of his rapid fills, the camera cuts back and forth from the singers’ faces to the trash can inferno. The superimposition of the footage has the effect of fusing Chris Maggio’s face with the flickering flame – and it becomes unclear whether he’s spitting the fire, or if his contorted features are emerging from the smoke. Other cuts are just as frantic – as the song intensifies, so does the splicing. Finally, during the razor-wire guitar solo, the camera swings around the room dizzily, and the band, the flames, the lights, and the icy smoke dissolves into a blur of color.

Here at HIP Video we are delighted to be teaming up with OHEV and The Heatseekers to bring you this throttle to the stops video. If you need more info call Andy Gesner at 732-613-1779, or email HIPVidea@aol.com.