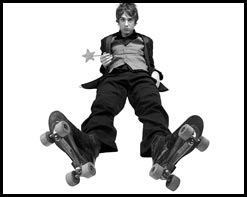 Matt Mahaffey–aka sElf–is a wildly prolific and versatile producer, songwriter, and multi-instrumentalist, and we’re willing to bet you’ve heard him before. You just didn’t know it. Consider this:  Besides writing the Expedia (Dot Com!) jingle and “Stay Home”–the first track on the 2.4 million-selling Shrek motion picture soundtrack–Mahaffey played the organ on Beck’s most recent acclaimed album Morning Phase and he’s currently scoring Disney Junior’s popular cartoon Henry Hugglemonster.  His fans, however, know him best for a string of albums he released as Self, beginning with 1995’s major-label cult classic Subliminal Plastic Motives where he unveiled his signature sound–a hook-laden, head-nodding blend of beats, samples, rock guitars, and all-around pop mastery. He continued to refine his sound over three additional LPs, ending with 2000’s fantastic Gizmodgery which was recorded only using toy instruments and featured the single “Trunk Fulla Amps.” Last month, Mahaffey released the Super Fake Nice EP–the first music he’s put out as sElf in 14 years. Lead single “Runaway” is exactly the type of bright-shining, earwarming pop gem that is bound to delight his old fans and earn him plenty of new ones. HIP Video Promo is extremely pleased to present the clever, viral-bound clip for “Runaway.”

The song begins with a twinkling, arpeggiated synth soon followed by a bass drum kick right before the beat drops hard, and the band hits an irresistible groove. Then, the synths drop out and Mahaffey lays down a verse over just bass and drums, spinning a tale about a girl who wants to “dance till the world explodes” and is looking for some sort of escape in him.  His vocal is commanding and hooky, but when the chorus breaks, the song blasts off with heavenly layered background vocals and a powerful melody, as Mahaffey drops some knowledge on his subject: “Pain is not the only thing / that will catch up with you one day.” Memorable lyrics aside, the magic of “Runaway” is in the music, as each section hits a different pleasure center, and leaves you longing for its return.

sElf’s clip for “Runaway” starts with a brilliantly clever concept and takes it all the way. Everyone knows that the internet is full of cat videos. There are lots of them, and lots of them go viral. But most of them are of dubious quality: grainy and shaky with no sense of composition. So with “Runaway” director Ballard C. Boyd has given us the mother of all cat videos: a beautiful, hi-def tribute to our mysterious fascination with felines. With glamor and artistic vision, his many furry subjects are seen perfectly lit and up close with wind blowing in their fur. Additionally, he explores familiar themes of cat video sensations. We see them move in time with the beat. We see them play instruments. We even see one drive a car. Both forward and in reverse. There is even more in store, but suffice it to say, you will be entertained. Add to this the incredible soundtrack of Self’s “Runaway”, and you’re looking at a surefire smash.

For more information on sElf and the hysterical video for “Runaway,” please call Andy Gesner at (732) 613-1779 or e-mail the HIP Video Staff at info@HIPVideoPromo.com . You can also visit www.Self.is/ or www.Facebook.com/pages/sElf-Matt-Mahaffey/252145467309/ for more info.