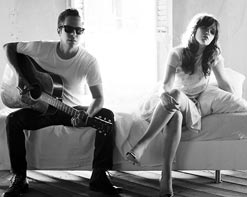 Can Zooey Deschanel fly? Human beings aren’t supposed to be able to take to the air, of course, but if Deschanel slipped the bonds of gravity and floated among the clouds, would any of her fans be surprised? She’s built her reputation on her feather-light style, and angelic beauty that feels more than a bit too flawless for the terrestrial world. In the clip for “Stay Awhile,” the single from the new She & Him album Classics, Deschanel refuses to stay earthbound. The mid-air choreography of the video — Deschanel’s casual defiance of the laws of physics — feel like perfect extensions of her personality.

The music made by M. Ward and Zooey Deschanel under the She & Him name has always felt both insouciant and timeless. Deschanel and Ward are students of musical masters, and they’ve applied what they’ve learned to their own productions. While Deschanel has proven herself to be an outstanding traditionalist songwriter — check out the sparkling “Why Do You Let Me Stay Here” from the 2008 She & Him debut — she’s a terrific interpreter, too. Classics, the fifth She & Him set, embraces the sound and spirit of mid-20th century American pop. Ward and Deschanel turn their talents toward material by Gerry Goffin and Carole King, Burt Bacharach and Hal David, Sammy Cahn, and other giants of popular song.

“Stay Awhile,” written by the British team of Ivor Raymonde and Mike Hawker, was a Top 40 (and UK Top 20) hit for Dusty Springfield in 1964. The song was Springfield’s second to chart, and while it’s been slightly overshadowed by the smashes that followed, it remains an indelible example of ’60s pop at its most effervescent. As always, multi-instrumentalist Ward and vocalist Deschanel have done their homework — the singer’s playfully seductive performance both echoes and extends Springfield’s own, and the producer has bathed the track in a warm glow deeply reminiscent of cinematic ’60s pop.

The “Stay Awhile” clip, too, is simultaneously retro and modern.  Ward and Deschanel perform in a middle-class suburban house as wholesome-looking and neatly appointed as the Cleaver residence. Yet there’s something odd and off (but never sinister) about it, too, and it isn’t just that there’s nobody home but the pair of musicians. Just like his partner, Ward defies gravity — he sits in mid-air and strums an imaginary guitar. Deschanel’s magic tricks are more kinetic: her dancing takes her to impossible angles and thumbs its nose at probability. When she opens the door and streams like a wind across a landscape of clouds, it feels like a homecoming.

It is our distinct pleasure to be working with She & Him once again and to be a part of their team. We would love to hook you up with copies of their new album, Classics, so please get in touch if you’d like some for you and your viewers! Please contact Andy Gesner and the HIP Video Promo staff at (732)-613-1779 or email us at  info@HIPVideoPromo.com for more info on She & Him.

For info about She & Him’s other videos, click HERE