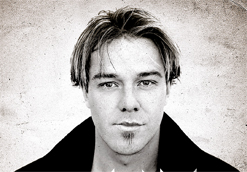 Anybody who has seen him in concert can testify that one SHIM (aka Shimon Moore) is enough for any music listener to handle. How about two SHIMs? One who moves at an average human pace, and another – a demonic doppelganger – whose accelerated activities are fiercely unnerving? Both the tormented Moore and his monstrous alter-ego haunt the frames of the video for “Crucified,” his latest single. Are they friends or foes? Will they work together, or will one absorb the other?

Hero and villain, lover and fighter, thoughtful songwriter and devilish provocateur, sweet singer and loud screamer, photogenic pop star and lens-shattering rocker: Shim Moore has been all of these things. As the longtime frontman and co-founder of Australia’s Sick Puppies, he was the face of a group that defied classification – one that delivered a searing amalgam of alt-rock, punk, emo, molten metal, throwback grunge, and soaring balladry. With Sick Puppies, he steered four albums on to the charts, including the thunderous Tri-Polar, which was released in 2009 and reached #12 on Billboard’s US Rock chart, and its ambitious successor Connect, a #2 US Alternative smash. The hit single “You’re Going Down” will remain in rotation indefinitely in sports arenas, wrestling rings, and anywhere where bursts of adrenaline are required. SHIM’s incendiary performance helped score the band a gold record.

On his own, he’s no less fiery, and no less stylistically restless. “Crucified” is a perfect example of the breadth of Moore’s talents and the flexibility that has always distinguished him among his peers. The song begins as a menacing stomp with industrial overtones and progresses to a dreamy, atmospheric bridge before exploding into a hard rock chorus. Moore handles the curves and changes with ease, radiating self-confidence and swagger. It’s a wild ride, but the star remains in control.

Video director Robyn August specializes in unique horror stories: his 2017 film Doggy See Evil pitted a canine against a malevolent specter. He’s a musician as well as a movie-maker, too – he’s fronted the Los Angeles band Rival Tides – and he understands the alchemy between hard rock and gruesome drama. In the clip for “Crucified,” his twin SHIMs have a problem: a body in a sack that they need to dispose of. The pair hauls the plastic sack to a graveyard and begins to dig – and one of them has a lethal surprise for the other.

Many thanks to Frank Mastalerz and Dino Kourelis at FM Management for bringing us on board for this exciting, high profile campaign! We’re thrilled to be working with SHIM to promote the new clip for “Crucified” and we encourage you to let us know what we can do to get this video included in your regular programming and online presentations in a timely fashion. Rest assured we’ll have plenty of SHIM merch available for on-air contests and giveaways throughout the campaign, so don’t hesitate to reach out if you’d like to get your hands on some.. Please contact Andy Gesner and the HIP Video Promo staff at (732)-613-1779 or email us at info@HIPVideoPromo.com. You can also check out www.ShimMusic.com for more info.