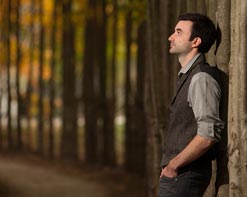 The eclectic Los Angeles based Ships Have Sailed, whose dazing debut EP Someday reflects thoughts on the outcome of the future, are exciting and filled with contagious energy. Their latest clip “Midnight” puts the band on display, and HIP Video Promo invites fans into the fantastic realm of this thrilling new artist.

Will Carpenter, the band’s founder, is an east coaster at heart—raised by Renaissance women, his eccentric mother and four talented sisters influenced his whimsical spirit. For the last eight years he has become submerged in LA pop culture, having toured with several influential bands. He currently plays lead guitar for 7Lions, a rock/hip-hop infused group signed to 2101 Records.

The clip is the official music video for the debut single. Having made the semi-final round of the International Songwriting Competition, “Midnight” has the vibes of past times, but the quirky costume design gives viewers the feelings of right now. Directed by James R.W. Hiatt and produced by none other than Carpenter himself, the clip introduces Ships Have Sailed’s most exciting new endeavor. The Los Angeles circus scenery is a must-see that transforms you to a spending and enticing time.

With a debut single and new video clip, Ships Have Sailed has never seen a better horizon! For more information on this exciting new band and their video “Midnight,” please contact Andy Gesner and the HIP Video Promo staff at info@HIPVideoPromo.com . You can also visit www.ShipsHaveSailed.com for more info.