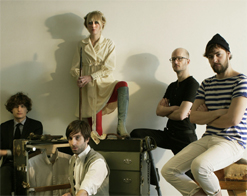 Hey there music video lovers! It’s Andy Gesner and the staff from HIP Video Promo, back with the second clip from the Shout Out Louds’s epic Our Ill Wills. You’ll remember that we sent you the video for the bracing “Tonight I Have To Leave It” a few months ago. At that point, the new album hadn’t been released in the United States, and the lead single served as (among other things) a dazzling teaser and a revelation. It wasn’t that “Tonight” sounded so different from the tracks on the band’s charming and well-loved Howl Howl Gaff Gaff – there was the same wild, frenetic energy, the same sweeping melodicism, and the same sort of madly romantic performance from frontman Adam Olenius. Yet there was palpable darkness, too – lovelorn desperation, homesickness, poise, depth, and gravity. Shout Out Louds had grown up.

And they’d done so in public, touring perpetually, and bringing their delightful, infectious indiepop to audiences around the world. They’ve shared stages with the Kings Of Leon, The Strokes, The Magic Numbers, and Secret Machines, and collaborated on a single with Brooklyn’s own Essex Green. Upon its release, Our Ill Wills stormed the Swedish Top 10, and it’s become an underground and critical favorite all over the globe. Tim Sendra of the All-Music Guide saluted the bandmembers for their artistic bravery, and raves about Olenius’s “choked, sadder-than-Robert Smith voice”, and lyrics that “slice deep into your heart.” Mark Hogan of Pitchfork compares Our Ill Wills favorably to the lauded Howl Howl, citing its “sharper hooks and emotionally richer songwriting”; Jonathan Keefe ofSlant calls the new version of Shout Out Louds “a more extroverted and accessible contemporary to Arcade Fire”.

What makes Our Ill Wills so engrossing? In part, credit must go to the players, whom, since the success of Howl Howl, have fused into a scary-tight unit. Producer Bjorn Yttling (best known as one-third of Peter, Bjorn, and John) has coaxed fiery, impassioned performances out of the Stockholm quintet, and persuaded them to stretch out and flex their excellent musicianship. Keyboard (accordiion, harmonica etc) player Bebban Stenborg lends her heavenly voice to many of these tracks, and provides a cool counterpoint to Olenius’s emotive wail. “Impossible”, the second single, is the dark heart of the record – a six-and-a-half minute heartbreaker that ebbs, flows, crests, settles into a false ending, and then soars to an astonishing culmination. It’s the entire album in capsule, and one of the most rapturous tracks we’ve yet heard in 2007.

For the “Impossible” clip, Shout Out Louds bassist Ted Malmros reprises his double-role as the band’s video director. Malmros won a Grammi (the Swedish Grammy Award) for his endearing video for Peter, Bjorn & John’s “Young Folks”, and we hope he’s got room on his mantelpiece for another. “Impossible” is a gorgeous piece of filmmaking as well as the perfect accompaniment to Olenius’s tale of romantic despair. It’s a chronicle of a long Scandinavian night – the sort of too-bright evening that complicates longing and compounds midsummer disorientation. Malmros catches the band under the whirling lights of an amusement park; they arrive separately and leave the same way, but gather in the arcade to keep each other cold company. One Shout Out Loud shoots a target and wins a stuffed Pooh bear, and the poor doll spends the rest of the clip staring upward from a bicycle basket. The carnival rides crash and spin under the never-dark sky, and the five bandmembers wander as if in a dream. The coin-op claw, fishing for prizes behind a glass case, becomes a metaphor for the futility of romantic connection; the inexorable rush of the rollercoaster suggests the speedy approach of the future. Throughout, Malmros’s colors are bold, dazzling, and hypnotic, and the red-stained faces of the Shout Out Louds are tremendously expressive in their impassivity. Heartbreak seeps through the frames, and radiates from the winsome faces of the young musicians.

We are thrilled that have the opportunity to be a part of the Shout Out Louds’ promotional team once again and we want to thank Martin Hall and the entire crew at Merge Records for all of their hard work. There are still some awesome Shout Out Louds US tour dates to be caught and we encourage you to be in touch to try to set up video interviews when they are in your market. Or if you’d simply like some copies of Our Ill Wills for on-air giveaways, let us know. If you need more info,
call Andy Gesner at 732-613-1779 or e-mail us at info@HIPVideoPromo.com . You can also visit www.MergeRecords.com, or www.ShoutOutLouds.com to find out more about Shout Out Louds.

For info about Shout Out Louds” previous video, “Tonight I Have To Leave It” click HERE