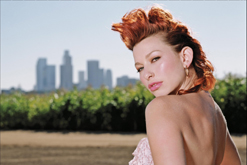 Hello to all of my music video cohorts! It’s Andy Gesner and the staff from HIP Video Promo, back with another terrific new video from an emerging act. By now, the stable of artists we’ve promoted at HIP is wide enough that it’s probably possible to draw connections between any two of them, no matter how different they sound. But we’re always thrilled when one of our clients refers another directly. Last year, we were honored to work with legendary songwriter and singer Linda Perry on her videos from In Flight; since then, Perry has collaborated with Sierra Swan on her debut solo album for Interscope Records. We expect any Perry-produced project to be nothing less than top-notch, and she and Sierra Swan have delivered.

Swan is young, but she’s no newcomer to modern music – she’s cut tracks with Chad Hugo of the Neptunes and added her low, powerful voice to Cold’s pile-driving Year Of The Spider. Aimee Mann sings and contributes a song to Ladyland, and Sheryl Crow producer (and Tuesday Night Music Club founder) Bill Bottrell assists Perry on several tracks. But although she’s been surrounded by musicians her entire life – her father was legendary guitarist Billy Swan –Ladyland is very much her show. Sierra Swan’s intriguing personality is evident on all eleven tracks, as is her personal arrangement aesthetic. An excellent piano player, Swan also incorporates woodwinds, strings and dense percussion into her radio-ready pop songs. If the resulting musical hybrid sometimes suggests the intricate soundscapes of Kate Bush’s early albums, Swan’s sultry, hypnotic singing pushes Ladyland into uncharted territory.

“Copper Red”, the kick-off track on Ladyland, sets the tone for the rest of the album: it’s a catchy piano rocker with a killer chorus and lyrics that feel deeply personal. Co-written with Perry, “Copper Red” is a defiant statement of self-acceptance. But there’s danger, too, and a tacit recognition that emotional stability is fragile, and capable of shattering like glass at any moment. Swan coaxes all of the ambivalence out of the verses with a vocal performance that beckons listeners closer, but still maintains an enchanting reserve.

That play between exposure and reticence – so evident throughout Ladyland – is the theme of Frank Borin’s revealing clip for “Copper Red”. Borin, a seasoned director who has shot clips for musicians as diverse as Good Charlotte, Eminem, and Bowling For Soup, casts the statuesque Swan as an artists’ model. She walks to the center of a classroom and drops her clothing; the fiery red of her hair and lips seems to burn straight through the frames and leave indelible marks on the cold institutional-green walls. As she sings to the room, the artist-observers passively sketch out their versions of her. Later, she sits at the piano barefoot, and sends her songs to the rafters. Then she gets her shirt back on and leaves the classroom on her own terms.

Thanks to their success with James Blunt, Custard Records has become one of the most respected labels in the industry and we are privileged to have the opportunity to once again work with Gregg Allen, Mark Gracious and the entire Custard team. They have been kind enough to supply us with enough copies of Ladyland for all of your on-air giveaway needs. If you need more info call Andy Gesner at 732-613-1779, or email info@HIPVideoPromo.com.