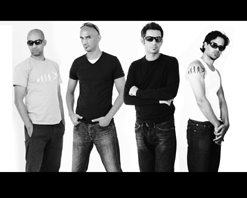 Hello music lovers! It’s Andy Gesner and the staff from HIP Video Promo, back with another thoughtful clip from an independent band building an international audience. Over the years, we’ve been proud to bring you new sounds from all over the globe: Scandinavia, Eastern Europe, Australia and New Zealand, and even Hong Kong. New technologies have made indie music a global enterprise, and no spot on the globe is currently more fertile than cosmopolitan Berlin. The German metropolis has recently experienced an astonishing cultural renaissance – young people from all over Europe (and further) are flocking to the city to participate in its famous artistic ferment. But the four brothers of Silent Evolution didn’t come from abroad. They’re proud Berliners by birth, and they’ve become notable participants in the town’s thriving musical subculture.

They’re fully attuned to Berlin’s resurgent spirit, too. The members of Silent Evolution sing songs of peace, unity, cross-cultural cooperation, and unfettered imagination. “The Silent Revolution”, their first single to reach these shores, is a story of hope and devotion to the cause of humanity. “I know that I’m not alone”, sings the endearing frontman, before promising that “together we’ll go on until the ignorance is gone”

Chasing the “new dawn” isn’t just a pipe dream for the quartet – it informs every choice they make, both on record and off. Their music is warm, bright, acoustic, and hopeful-sounding, and the musicians harmonize as only brothers can. They’ve got their iconography together, too: their logo is a five-part image of the stages of man, culminating in a primate taking flight. We can achieve evolutionary escape-velocity, the image seems to promise, if we all pull together and commit ourselves to a progressive vision.

The clip for “The Silent Revolution” extends the metaphor further: here is a visual representation of a group of musicians longing for transcendence and interpersonal harmony. The members of Silent Evolution are bathed in hot light – in fact, they emerge from a white background like apparitions of positive energy. Vocalist Al is the first to fade in, his body reflected in the glass-like surface of the set. His image is captured by a an old black and white television set; it’s a bit on the fritz (as you’d expect from a vintage model), but he still transmits loudly and clearly. The bright white field that surrounds the musicians – and the television – quickly becomes a staging area for a barrage of icons. Tanks, violins, graves, religious symbols, and words of hope and faith circle and swirl around the musicians; through it all, they remain confident and serene. In one memorable sequence, a cross, an Arabic glyph, a Star of David, and a yin-yang symbol rotate around a member of Silent Evolution. He stands in their midst and lets them do their work – and then he brings them together, and in a flash of light, produces a heart. .

It is an enviable pleasure to be working with 100%Cultpatent to champion the newest video from Silent Evolution. We also have a major stock of “Silent Revolution” CD single, so don’t forget to reach out for your on-air giveaway needs. If you need more info, call Andy Gesner at 732-613-1779 or e-mail us at info@HIPVideoPromo.com .