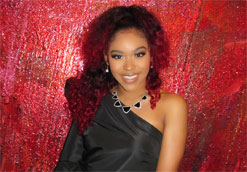 Self-described “Afro-tina” Reiana Fernandez – known to the world as Simply Rayne – didn’t come out of the womb singing. This 20-year-old’s journey to success has been steeped in hard work and self-possession. She was raised on classics like Stevie Wonder, Marvin Gaye, Bill Withers, Al Green, Diana Ross and Etta James, and on her own explored modern icons like Michael Jackson, Destiny’s Child, Prince, Rihanna, Bruno Mars, Mary J. Blige, and Lauryn Hill. But her number one influence is none other than the queen herself: Beyoncé.

Simply Rayne hit the ground running with her career: her 2013 debut single earned her radio play in Australia, and in 2016 she began a working relationship with the production duo The KlubJumpers, who have 80 Billboard-charting songs and numerous Gold and Platinum Records to their name. She’s shared the stage with such diverse artists as G-Eazy, Steve Aoki, Lil Wayne, Migos, funk icons Lakeside, and Khalid, and performed two years in a row at the Mala Luna Music Festival. She’s made numerous live TV appearances and appears as herself in the upcoming independent romantic comedy film The Margarita Man. With faith-based ethos and unflinching optimism, Rayne strives to set a positive example as a multi-cultural young woman, and has earned the title of “Teen Vogue Ambassador”; had cover features in ReFocused Magazine and ChicaGirl; being a Bold Favor Award Honoree, in recognition of amazing leadership in the entertainment field, and being named a City of San Antonio Youth Ambassador.

Following the empowering urban anthem “How We Do” and the smoldering, soulful ballad “Need To Know”, Simply Rayne’s latest offering is the irresistible tropical soul-pop single “Don’t Stop”, which likens the bliss of dancing to the carefree purity of new love. Produced by the KlubJumpers, it’s a balmy, sun-kissed track bursting with urban swagger. While her love of hip-hop and R&B shines, the featured verse by Baby Bash also adds a hint of Latin flavor. In the “Don’t Stop” video, Rayne takes influence from Christina Aguilera, Rihanna, Shakira, and of course Beyoncé in her moves, as she encourages her love interest to never stop dancing. She says of the song and video, “The meaning of my song ‘Don’t Stop’refers to keeping the flame in a relationship alive- don’t stop loving and caring for me. The concept of the video incorporates my multicultural background, strong sisterhood, and of course a love interest with an underlying theme of sassy female empowerment. I would describe the making of the video as enthusiastically fun and uplifting.”

If “Don’t Stop” is any clue, Simply Rayne just simply won’t stop until she’s on top of the world! The song has already been remixed by The KlubJumpers, Jay Salter, Dark Intensity, Knappy, Ronnie DiCicco, DJ Strobe, and John Hohman, and she won’t stop dancing as she sashays her way into the spotlight. We hope you embrace this clip as much as we have and consider including it in your programming and online presentations in a timely fashion. Rest assured we’ll have plenty of Simply Rayne merch available for on-air contests and giveaways, so don’t hesitate to reach out if you’d like some. For more information on Simply Rayne, please contact Andy Gesner and the HIP Video Promo team at (732)-613-1779 or email us at info@HIPVideoPromo.com. Visit www.SimplyRayne.com for more info, and www.twitter.com/SimplyRayne1 and www.instagram.com/SimplyRayneOfficial for the latest updates.