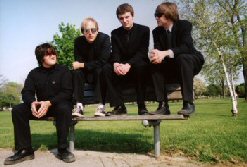 Rainbow Quartz seems to have cornered the international market in sixties-style jangly guitar pop. You probably recall last year when HIP Video teamed up with Rainbow Quartz to bring you Scandinavian sensations The Lovethugs and The Jessica Fletchers. We’re pleased that this fine label has brought us on board once again with some great new music for all of you.

The latest from the Rainbow Quartz label family are Detroit’s The Singles. This video features the song “He Can Go, You Can’t Stay” from the CD Better Than Before (it’s also available as part of a three-song sampler disc). Recorded at Ghetto Studios with producer Jim Diamond (The White Stripes, The High Strung, The Mooney Suzuki), the recording has a sparse quality that gives it a very “live” feel. In contrast to many other young bands today who spend virtually all of their time on the road and live from show to show, The Singles have a long-range plan, as guitarist Vince Frederick explains: “Our main goal is to record two albums a year,” Vincent notes, “I hate how long bands take to release a follow up album. The Beatles progressed perfectly. If you want to understand what I’m getting at, listen to their albums chronologically.”

The song itself is tightly structured pop, featuring an earnest lead vocal delivery by Vince Fredrick. Frederick, fellow guitarist Will Yates, and bassist Dave Lawson have the minimalist pop sound down to a near-science, with not one superfluous note nor one out of place. Yates’ lead guitar playing rocks, without a doubt, but without calling attention to itself. The only hint of flamboyance is Dave Knepp’s Keith Moon-esque drum finale.

The video features the band, neatly groomed and nattily dressed, performing the song in crisp limbo lighting. It is precisely the look of a band performing their single on a late night talk show, and as such is familiar and comfortable. This is framed with the “story” told in the song, where the “He” and “She” mentioned attend a party together. In contrast to the performance segments, these have a distinctly and deliberately underexposed “home video” look, exactly as one would expect from footage shot at a party thrown by college-aged kids. The pair draw looks from other partygoers – “he” plays the happy go lucky socialite role to the hilt while “she” wanders out to a balcony to do a little soul searching. As the song draws to a close, “she” appears to hesitate about which direction to take.

Here at HIP Video we are prepared to meet all your Rainbow Quartz band needs. The Singles will be performing in Austin during SXSW (March 20), and we’ll arrange video IDs or interviews. In addition, we’ll have CDs and other goodies. As always, if you have any questions, feel free to call 732-613-1779, or email info@hipvideopromo.com.