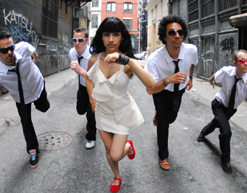 Greetings, everybody, it’s Andy Gesner and the staff from HIP Video Promo, here to spread the word about one of New York City’s truly inimitable acts. We’ve always applauded visionary artists who don’t fit comfortably into any one particular pigeonhole, and have respect for musicians who defy stereotypes and blur the distinctions between genres. In other words, we’ve got nothing but love for Si*Sé — and after watching their latest clip, we bet you’ll feel the same way. The “This Love” video perfectly captures the Si*Sé sound: a butter-smooth fusion of contemporary pop, throwback hip-hop, downbeat, reggae, soul, and sophisticated electronica. “It’s about mixing stuff up that’s not usually mixed together”, explains Carol C, a vocalist seductive enough — and talented enough — to heat up rooms of any size.

Although the sound is cutting-edge, Si*Sé are no newcomers; in fact, they’ve been stars in New York for years. David Byrne is a supporter, and they’ve toured the globe in support of the Talking Heads frontman. Few other bands can claim to have shared stages with The Roots and Arcade Fire and Kraftwerk — and that’s just to name a few of the luminaries they’ve played with. Si*Sé music has been featured on episodes of CSI, Sex In The City, Project Runway, and One Tree Hill; fans of NBC cult hit Lipstick Jungle were treated to the band’s luminous cover version of Duran Duran’s “Come Undone”.

Their interpretive skills are on display on Gold, their latest release. Si*Sé’s remarkable reading of Fleetwood Mac classic “The Chain” — a concert favorite — is preserved here. Elsewhere the material is resolutely — and often startlingly — original. Cliff Cristofaro’s production shimmers with uncommon grace, and Carol C’s alternately English and Spanish vocals are positively bewitching. “Buscaré” is a sizzling R&B workout; “Donde Esta” an expression of longing; “Goes On” an exhilarating statement of purpose. Best of all is lead single “This Love”, a sleek romantic post trip-hop masterpiece reminiscent of Sade at her most transcendent. Here’s one for all of those who love to get carried away on the dancefloor (and don’t we all?); transported to another time and place by otherworldly sounds.

We’re very honored to be working with the Si*Sé crew to bring you this fantastic new offering. If you need more info, call Andy Gesner at 732-613-1779 or e-mail us at info@HIPVideoPromo.com.