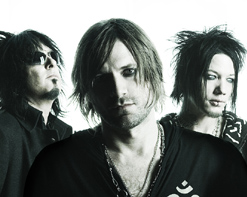 What’s up, rock and roll lovers? It’s Andy Gesner and the staff of HIP Video Promo bringing you a video from an artist of legendary stature. No band epitomizes theatrical glam-metal like Mötley Crüe – and Nikki Sixx was always the most theatrical, the most glamorous, and the most metal member of the band. He wrote or co-wrote most of the group’s signature songs: “Too Young To Fall In Love”, “Looks That Kill”, “Girls, Girls, Girls”, “Dr. Feelgood”, “Shout At The Devil”. “Home Sweet Home”, the ballad he penned with Tommy Lee and Vince Neil, changed the face of the genre and made it mandatory for metal bands to show a sensitive streak. His growling, down-tuned bass guitar style influenced a legion of hard-rock players, and continues to provide a template for punk, metal, and indie-garage instrumentalists. Historians of the Crüe concur that it was Nikki Sixx who crafted the group’s image and who took a leadership role in the formation and guidance of the band. He was the heart of the Crüe, and the truest believer in their anything-goes ethic.

Of course, that meant he was the hardest-partying member, too – and considering the well-chronicled exploits of Tommy Lee, Vince Neil, and Mick Mars, that’s really saying something. Nikki Sixx’s walks on the wild side are the stuff of Sunset Strip legend, and have inspired some of the Crüe’s most harrowing songs: “Kickstart My Heart” (about the night he was declared legally dead and had to be revived by paramedics), “Dancing On Glass” (about the time he was thrown, unconscious, into a dumpster by a security guard). Now older and wiser, Nikki Sixx isn’t exactly proud of these experiments in wild debauchery, but neither does he disavow them. They were part of a path toward enlightenment, and they’ve granted the bassist a singular perspective. And with Sixx A.M., Nikki and a new group of inspired musicians are turning those memories of Eighties excess into something altogether more edifying.

The Heroin Diaries were discovered by accident: Sixx was cleaning out a closet and chanced upon notebooks he’d scribbled during the height of his addiction. Realizing that the diaries constituted an astonishingly honest (and, to be fair, black-comic) chronicle of the long slide into drug madness, Sixx decided that they deserved to be shared with the world. The Heroin Diarieswill be published on September 18 – and not content with the written word alone, the bassist assembled Sixx A.M. to compose a soundtrack. “Life Is Beautiful”, the hard-rocking lead single, deals with themes made explicit in the book: the desire to break through into an altered state, the attraction of chaos, and the wisdom that comes from pushing yourself to the limit.

There’s plenty of footage of Sixx A.M. in performance in the expressive video for “Life Is Beautiful”; Nikki Sixx, in particular, rocks as hard as he did with Mötley Crüe. He looks great, too: poised, dignified even! A face on metal’s Mount Rushmore, a grizzled rock and roll survivor. Yet there’s evidence of Sixx’s new literary turn all over this clip: shots crumple up like pages of a book, and words, scrawled in red ink and culled from the lyric, float over the band as they play. The video opens with Sixx reciting a remarkable line from the diary – “there’s nothing like a trail of blood to help you find your way back home” – and ends with the bassist offering another spoken reflection on the price of knowledge. Mötley Crüe once gave the impression that they were a band that could care less about lyrics; now, their leader, spokesperson, and principal songwriter wants to make sure that you catch – and understand – every last word.

Huge props to Jason Spies, Sam Alpert and the entire 10th St./Eleven Seven Music crew for getting us set up with everything we need to hook you up! We have plenty of copies of The Heroin Diaries Soundtrack for on-air giveaways, so don’t hesitate to drop us a line to get your hands on some! We also have some amazing excerpts from The Heroin Diaries, a must read for any red blooded rock and roller! If you need more info, call Andy Gesner at 732-613-1779 or e-mail us at info@HIPVideoPromo.com. You can also visit www.10thst.com, or www.SixxAMMusic.com to find out more about Sixx A.M.