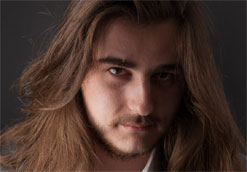 S.J. Armstrong is a man of his own. Being a one-man show, knowing how to play a dozen instruments and creating an entirely new genre- he has an extremely creative mind. He labels his music as “apartment folk”, inspired by his basement shows in his own house; the term possesses a broad definition as it focuses on the writing process more so than the production, giving it a raw spirit. S.J. certainly had a crazy time in his early twenties; he writes about the world around him, and only relies on himself to write his music. Incorporating elements of alternative, acoustic, and classic rock, he isn’t afraid to branch out from his acoustic guitar. Not a fan of overproduction, S.J. typically uses the original demos of his songs for the official release- fueled and inspired by a coffee-induced psychotic break at 3 am. This gives S.J. Armstrong the human touch to his tracks. Organic and innovative, he’s a poetic lyricist and visionary.

Though he has a degree in political science, the twenty-three-year-old singer has taken a different path post-graduation. Growing up in Los Angeles California, music has always been an extension of himself. S.J. started playing instruments at age ten but started to write his own music at age nineteen. He originally wanted to be a jazz guitar player, and even experienced a country phase where he performed as “The Mysterious Mr. Shoe”, but he found a liking towards rock. Now, unafraid to be vulnerable, he takes on the challenge of being his own show. Channeling Bon Iver and Bright Eyes, he has released several singles, and is working on a seven-track album that is set to release this fall.

S.J. filmed his recent music video “Some Restful Day” by himself, and it takes a trip into the conceptual aspect of his lyrics and message behind it. He dedicated his time to get shots of birds, staircases, signs, parking lots, and satellites to add hidden messages that only someone of his stature could grasp. The video opens up with strategic low-angle shots of Los Angeles to highlight the theme of being small, insignificant and dissociated. During his last semester of college he kept having dreams about a girl in a movie theater but he could never find her. He would wake up in the middle of the night constantly searching for his dream girl, but she never came. He turned this yearning into a powerful acoustic ballad complete with his own personal tuning on his guitars. The recording is actually a demo which adds to the authenticity of his visuals. To the naked eye the video seems quite simple but once you look a little closer you can see the subtle references. Armstrong believes his music speaks for itself, and instead of talking about his songs he puts out music videos to explain his direction.

Here at HIP, we’re stoked to be working with S.J. Armstrong. We hope you enjoyed the clip for “Some Restful Day” and add it to your cherished programming! For more info on S.J. Armstrong, please contact Andy Gesner and the HIP Video Promo team at (732)-613-1779 or email us at info@HIPVideoPromo.com. For more info and recent updates, head to www.SJArmstrongMusic.com.