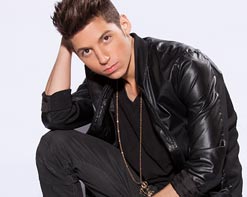 Some individuals are meant to be performers. Skye Stevens is one of the rare few that has always seemed naturally at home in front of excitable crowds flickering cameras, and his new video “Pass The Keyz” will leave no doubt that he has it in his genes. This 21 year old sensation started on his path young and he hasn’t looked back once. It began with dance lessons, quickly morphed into music and after performing regularly in the Boston he landed a spot on an international Broadway tour that made stops in New York City, Pittsburgh, and Toronto. The tour started before the school year was out, so he had to miss the final weeks of his high school career; it’s a time that some teenagers wouldn’t give up, but just a necessary and worthy sacrifice for someone following their dream.

In 2012, after bouncing around studios and also seeing a relocation to LA, Stevens’ high-energy, high-fun single “Takes All Night” reached the top 20 on the Billboard Dance charts and has become a staple in clubs and on radio throughout the country, while the official video has over a million views. He found his sound blending influences together into what he refers to as “urban pop.” Following up on this attention he now releases “Pass The Keyz,” a heart-racing number that is at once bombastic and bassy as it is angelic and heavenly. Stevens delivers a performance well beyond his years with his decisive voice floating on top of a roller coaster beat that his every peak and valley with a conviction rivaling any pop song on the charts today.

The task of creating a visual that is on par with the energy and electricity of “Pass The Keyz,” but Stevens welcomes the task. Stepping into the director’s chair as well as starring in the video, Stevens has crafted vibrant piece that uses a variety of cinematic techniques to blast a full spectrum of colors across the screen. At different times he shows his moves alone, with his boys at his side, and with a stunningly beautiful lady sharing in this physical indulgence. One moment it feels like pop music Warhol, the next a hip shaking Jackson Pollock, and even an electronically soaked TRON, but no matter what the inspiration, the end product is a kaleidoscope of beautifully executed visuals and a perfect compliment to the fierce nature of “Pass The Keyz.”

We are proud and excited to introduce this exciting new talent to you and your viewers and we are here to do whatever we can to get this video into your programming. Please contact Andy Gesner and the HIP Video Promo crew at (732)-613-1779 or email info@HIPVideoPromo.com for more info on Skye Stevens.