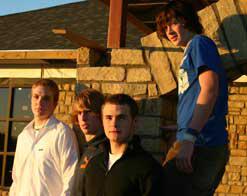 Hello everyone! It’s Andy Gesner and the staff from HIP Video Promo. When the entire world of underground music descends on Austin in March, it can sometimes be tough to remember that SXSW was launched as a regional festival, and that Central Texas has one of the best indigenous rock and roll scenes in America. Punk rock fans in the Dallas-Fort Worth area know Just Short Of Sunday from their scalding shows and well-reviewed independent releases – the group of Texas teens played with precocious fury, and frontman Josh Tatum wrote catchy, immediate songs that wouldn’t have sounded out of place on an All-American Rejects album. Just Short Of Sunday disbanded in 2005, but Tatum continued rocking, picking up a new gang of local compadres and further establishing himself as one of Fort Worth’s most interesting exports to Indie Rock nation. The name of the new band is Slider’s Fault, and they’re at once tougher, smarter, and more irresistible than Just Short Of Sunday. The combo was at home atSXSW – showing off their smiles and self-directed videos, and impressing industry bigwigs with a showcase gig that seemed to capture the heat of the Austin streets.

In guitarist Austin Clinkscales, Tatum has found a perfect foil – an instrumentalist perceptive enough to respond to the contours of his melodies, and rough enough to kick the songs around when necessary. Clinkscales’s half-spoken, half-shouted backing vocals throw Tatum’s plaintive voice into relief, and make Slider’s Fault’s songs feel like a ferocious inner dialogue. The steady rhythm section (bassist Russ Glaser and drummer Richard Millsap) play with a grace and sensitivity uncommon to D.I.Y. pop-punk acts. Together, they’ve recorded a debut EP – the bracing Road To Last July – that positively bristles with potential. The recordings from The Road To Last July have already become ‘Net favorites, burning up MySpace, PureVolume, and punk weblogs across the country.

“Last Call For Sympathy” is the young band’s most exciting cut yet. As the guitars lacerate, and as Tatum delivers an inflective, heartfelt vocal, the song mounts to a stuttering, Candy Apple Grey-like chorus. It’s a narrative penned from self-exhaustion – the storyteller is internally divided, giving himself advice that he knows damned well he’s disinclined to take. The clip for “Last Call For Sympathy” dramatizes this division by literalizing it. As the band rocks furiously in an abandoned warehouse (a nineteenth-century Texas structure, incidentally), a smartly-dressed version of Tatum sings to his slacker self. They sit together on a grungy sofa in a typical twenty-something’s living room – Tatum’s better self imploring his recalcitrant alter-ego to shake off his despondency. But they don’t lock eyes, and they don’t touch, and even two more replicas of the “good” Tatum aren’t enough to reach the “bad” version. In one particularly telling shot, the Slider’s Fault singer catches his reflection in a windowpane; it gives him advice too, but he just shakes his head and walks away.

We are happy to be working with Eric Klein and the folks at Pickslide Records to bring you this enticing new clip. We will have plenty of copies of The Road To Last July for all of your on-air giveaway needs. If you need more info, call Andy Gesner at 732-613-1779 or email us at info@HIPVideoPromo.com.