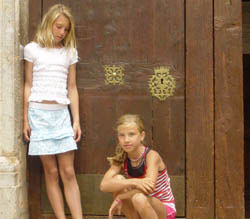 Hello to all my friends in music video land! It’s Andy Gesner and the staff at HIP Video Promo, back again to share a special clip from an indie group that’s lately been making headlines in news sources as disparate as Seattle Weekly and the Today show. We’ll start with the best-known fact about Smoosh: this band is young. And we’re not talking snot-nosed college kids, either – no, the elder member of this sister act just reached her teens. Asya, 13, writes the songs, plays the synthesizer, and sings, and Chloe, 11, holds down the backbeat on the drumkit. Comparisons to Hanson stop here: while the Tulsa trio had their sights set on the top of the charts, the Seattle sisters were raised on alternative music (Chloe cites Sleater-Kinney and Quasi drummer Janet Weiss as an inspiration and influence), and have adventurous aspirations that would be familiar to experimental indie bands across the nation. In fact, famed Brit music mag NMEproclaimed Smoosh as “The hottest new band in the US underground.”

It would be easy to dismiss Smoosh as a novelty. But if you did that, you’d just be revealing that you hadn’t bothered to listen to She Like Electric. Asya’s songs are sophisticated, unpredictable, and edgy, and reveal greater dimensions on repeat listens. Chloe is an imaginative and versatile drummer, and her clever parts complement her sister’s narratives perfectly. The members of Smoosh write and perform with the alacrity of youth and the skill of musicians twice their ages. Bands like Pearl Jam, Cat Power, The Presidents of the United States of America, and Death Cab for Cutie agree, and have offered Smoosh opening slots during their Seattle shows. Although the duo is still in middle school, they embarked on their first regional tour this year with HIP favorites Aqueduct and Mates of State, and will soon be coming to the East Coast (during summer vacation, of course!).

The Death Cab for Cutie connection proved fortuitous for Smoosh – but it’s one that developed along unconventional lines. Chloe was originally a student of Death Cab drummer Jason McGerr, and it was he who suggested that she try to improve her skills by finding another musician to play with. Fortuitously, Asya had been writing songs and playing synth since she was four years old. She’d only taken a few lessons, but had nevertheless developed an intuitive and expressive style on the instrument that many musicians spend a lifetime trying to attain. Their first recordings, released through the band’s website, established the group as accomplished indie-pop players and composers.

The video for “La Pump”, one of the central (and hardest-rocking) tracks on the delirious She Like Electric, is a lark: a colorful piece of claymation that comfortably suits both the music and the group. Plasticine figures vie for screen space with dolls and toys, and, occasionally, the two members of Smoosh themselves. But the sisters are usually represented by clay figurines – one slamming at the drums with gritted teeth, the other singing with her hands on a silver spraypainted model synth. The duo plays on the streets of a city that has outlawed music, in defiance of its growling puppet mayor. Just as the song is reaching its climax, a hand reaches down from the top of the frame and stops the rock by disconnecting a cable. But a crowd has gathered, and the groundswell in favor of the band is impossible to ignore – and Smoosh is allowed to continue. The clip has the feel of a school-project diorama sprung to life, and when the good guys triumph in the end, it’s a legitimately gratifying moment.

Here at HIP Video Promo we are extremely excited to be working with Clay Martin and the cool folks at Pattern 25 Records to bring you this entertaining clip. We have a ton of Smoosh goodies to send out for on-air giveaways, including t-shirts, stickers, buttons, and awesome She Like Electric lyric booklets. The band is planning an East Coast tour in August, including a show with Sufjan Stevens at the Bowery Ballroom on August 19th, and we would be happy to set up video interviews and IDs if they are coming through your area. If you need more info, call Andy Gesner at (732) 613-1779, or email info@HIPVideoPromo.com.