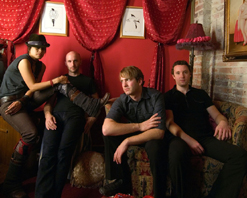 Greetings to all of my cherished video programmers nationwide! It’s Andy Gesner and the staff from HIP Video Promo, pleased to be working with our friends at Jade Tree to present to you the latest video from a terrific new member of their celebrated roster. And what a clip it is, too – creepy, visually arresting, and simultaneously futuristic and reminiscent of the glory days of MTV. In other words, it suits Snowden perfectly. The Atlanta quartet nods to its arty post-punk inspirations – Joy Division, Echo & The Bunnymen, Remain In Light-era Talking Heads – and then fashions those influences into something fresh and novel. Likewise, video director Geoff Plauger’s inspired clip for Snowden’s “Like Bullets” shares some of the evocative minimalism and stark electro-primitive beauty of the “Once In A Lifetime” video. In execution, though, it’s completely modern.

For starters, the “Like Bullets” video contains projections, but Plauger doesn’t make use of a green-screen. Instead, he’s dressed up a quartet of actors in black body-stockings, and these humans become the screens on which the footage of the band rolls. Since these “screens” aren’t flat, the projections are naturally distorted; at first, Plauger fills each human-shaped canvas with an image of a member of Snowden. But since the actors in the leotards don’t move in the same way that the people in the footage do, there’s a fascinating disconnect between viewer expectation and the images in the clip. Heads seem to turn at crazy angles, groupmembers swap bodies, limbs and torsos ripple and warp. A soloing guitar appears on the chest of one actor; the face of another becomes the flat surface of a kick-drum struck by a foot-pedal. Finally, in a striking image straight from a sci-fi film, the heads of the four human-shaped screens explode – and the images of the musicians fall back, heads and shoulders slumping down the torsos of the actors’ bodies.

It’s all unsettling and hypnotic, and further proof that the many of the best videos are built from simple ideas that are inexpensive to execute. That resourcefulness is characteristic of both Geoffrey Plauger’s Refrigerator Art production company (Plauger also did the clip for Clap Your Hands Say Yeah’s “Over And Over Again”) and Snowden themselves. Since forming in 2004, the quartet has toured constantly, building a devoted audience, and sharing bills with Arcade Fire, CYHSY, and The Unicorns. Anti-Anti, their debut album, is bracing and angular in places, and doesn’t hide its outrage at the state of the world – but singer and guitarist Jordan Jeffares is startlingly direct, too, and his melodies are never less than infectious. “Like Bullets”, the lead track from Anti-Anti, fuses a shout-along chorus to a teetering bass groove; it’s intentionally wobbly and unstable, but its forward momentum is never less than captivating. Like Plauger’s visionary clip, it seems normal from a distance – but the closer you inspect it, the more it appears to move according to its own weird and unearthly logic, and the deeper it draws you in.

We are thrilled to working once again with Tim Owen and all of the good folks at Jade Tree. We are huge fans of Jade Tree here at HIP, and find ourselves putting in our favorite Jade Tree releases (The Promise Ring, Nothing Feels Good, Onelinedrawing, The Volunteers) in our 5-disc office shuffle on an almost daily basis. Snowden will be on the road with Kings of Leon for all of May and June and we’d be more than happy to set you up with a video interview when they visit your market. We also have plenty of copies of Anti-Anti on hand for all of your on-air giveaway needs! If you need more info, call Andy Gesner at 732-613-1779 or e-mail us at info@HIPVideoPromo.com. You can also visit www.JadeTree.com, or www.Snowden.info to find out more about Snowden..