Society of the Silver Cross “When You’re Gone” 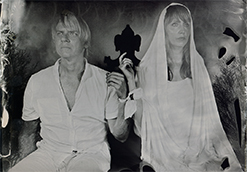 Modern technologies have brought bands closer to their audiences than they’ve ever been before. In the process, some of the mystique of rock music has been dispelled. If you, like us, miss bands that make songs that play like tantalizing riddles – bands that feel like a dark secret – we’ve got an act for you. Everything about Society of the Silver Cross is heavy with mystery: they lure the listener into their sound, and their world, like ghost lights in a dense forest. Follow, if you dare, and what you’ll discover is a band that has developed a singular style – one that draws from darker, more cinematic moods, textures and cosmic atmospheres resulting in an otherworldly blend of musical bliss.

But while songs like “When You’re Gone” seem to be coming from a strange, parallel universe, there’s nothing unusual about the origins of the Society of the Silver Cross. Frontman and songwriter Joe Reineke was part of The Meices, the energetic punk rock band that lit up the Bay Area and beyond in the ‘90s. After that, he led the ambitious Alien Crime Syndicate, whose 2004 album Ten Songs In The Key Of Betrayal landed on many year-end best-of lists. After the breakup of ACS, Reineke and his Silver Cross collaborator (and life partner), Karyn Gold-Reineke, traveled the world and immersed themselves in the musical culture of India. They’ve brought back some unusual instruments too, including a harmonium, a small pump organ used traditionally for chanting and a shahi baaja, or Indian autoharp, and they’ve incorporated their discoveries into their songs. In “When You’re Gone”, the mournful autoharp helps to relieve the ache – but so does Reineke’s searching voice, and a circular, subtly catchy guitar riff that stubbornly refuses to resolve.

Critics are already bewitched: Metal Injection called the song “haunting and cinematic”. A song this immersive demands a mesmerizing music video – and Society of the Silver Cross has delivered. The band co-directed the video (shot on film) with Jenni Hensler, who has worked on music videos for Chelsea Wolfe and Zola Jesus. The video for “When You’re Gone” is a slow-motion meditation, and a window into a hypnotic, yet beautiful inner state. The clip begins as it ends – with sands sifting through a woman’s hands. It’s a visual metaphor for the impermanence of existence and the unknowability of fate, and it’s a really cool thing to watch, too.

Here at HIP Video Promo, we’re delighted to partner with Joe and Karyn from Society of the Silver Cross to promote their debut music video for “When You’re Gone”! We’d be thrilled to see this video added into your cherished programming and online presentations in a timely fashion, so please check it out as soon as you can. Rest assured we’ll have plenty of Society of the Silver Cross merch available for on-air contests and giveaways- all you need to do is reach out to us to get your hands on some. For more information on Society of the Silver Cross, please contact Andy Gesner and the HIP Video Promo team at (732)-613-1779 or email us at info@HIPVideoPromo.com. You can also visit SocietyOfTheSilverCross.com for more info on the band.

Visit Society of the Silver Cross