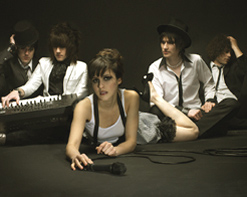 Greetings my cherished programming community! It’s Andy Gesner and the staff from HIP Video Promo, here with another clip from a group of young British stars with their eyes on the American market. The Soho in New York City might be lousy with mall-shops, but back in London, Soho means decadence and glamour, glitz, debauchery, and danger. Soho has been the heart of the British sex industry since the days of Dickens; it’s aggressive, transgressive, and impressively multicultural. The Sohodolls share all the characteristics of the neighborhood, and their music is characteristically stylish, sensual, and, when necessary, deliciously sleazy. They look like Soho, too: singer Maya is half-Lebanese, and guitarist Toni hails from Finland and played in a late incarnation of All About Eve. (Synth player Weston is British, but even he’s got the London emigrant spirit: he was raised in far-off Portsmouth.)

They’re outspoken, too. The Sohodolls rode “Prince Harry” – a cheeky take at the British royal – into the U.K. Indie Top Ten. “No Regrets” is a statement of sexual abandon; “Trash The Rental” is pure destructive glee. “Right And Right Again”, their lead U.S. single, declares war on anybody who dares to stand in the band’s path to success – and from the way Maya delivers it, you know she’s not kidding around. Obviously, this is no fey electropop band: here’s the rare dance act that can slug it out with the rockers.

They’ve proved it onstage: Sohodolls has a well-deserved reputation for furious, chaotic, in-your-face live performances. Maya and her bandmates have taken their act all over Europe, shared bills for Daft Punk, The Charlatans, and The Magic Numbers, and even made a successful swing through California earlier this year. They’ll close the summer and begin the autumn with a whirlwind U.K. tour; the Sohodolls will be playing somewhere in the British Isles almost every day. Ribbed Music For A Numb Generation, their soon-to-be-released debut album, captures the electronic anarchy – and the rough humour – of a Sohodolls show. Producers Robert Harder (Babyshambles, Sunshine Underground) and Steve Lyon (Depeche Mode, The Cure) have thickened and deepened the band’s sound: they’ve kept the raw electroclash energy of the early singles, but added to it full rock-band dynamics. The result is already setting the London underground on fire; U.S. domination seems but a heartbeat away.

Video director Joe Marcantonio is another rapidly-emerging artist; barely 26 years old, he’s already shot clips for some of the London’s hottest new acts, including Jamie T, Larrikin Love, and Bobby Cook. His vibrant clip for “Right And Right Again” exposes the dangerous, hazy glamour of Sohodolls and their milieu. Marcantonio’s camera twists in and out of focus; the corners of the frames blur, sharpen, and distort. He first shoots Maya in rich black and white – she sits, garters on, in a dressing room, and purrs at the camera through the gauzy filter. But by the time the song hits its hooky chorus, the Sohodolls are captured live in performance, and neon-bright beams of primary color stream over the shoulders of the band. Maya doesn’t miss a beat, though – she keeps right on teasing the lens, beckoning seductively as the images slide into a red-hot blur.

The staff here at HIP is brimming with excitement to be working for the first time with all the wonderful people at A&G Records, who we were introduced to by the exceptional Joelle Caputa at Audio Crush PR. We’ll have plenty of copies on hand of Ribbed Music For A Numb Generation for all of your on-air giveaway needs, so don’t hesitate to drop us a line. For more info about the Sohodolls, you can email us at info@HIPVideoPromo.com.