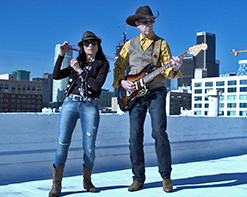 If this brutal election cycle has proven anything, it’s that many people in this country are ready for a change. A big change done in a big way. While budgets grow and profits soar, the American Dream is feeling the squeeze on both sides, with the most vulnerable often being those who work the hardest just to make ends meet. Steven and Myla from Soles of Passion saw their own livelihood compromised in the collapse of 2008 and have turned their victim status into one of advocacy and justice. That message is front and center in the brand new “Tax Slave” video!

Since their formation the band has set their sights solely on the corruption that is so pervasive in this country. Their message isn’t one that beats you over the head, either, it’s one that is wrapped in a satisfying, on-point country music delivery. All of the hallmarks are there. Telecasters, fiddle, cowboy hats and boots. In “Tax Slave” they’ve even upped the ante by throwing in a killer sax solo, too!

The “Tax Slave” video makes no bones about it, they’ve got an axe to grind. The video revolves around a slimy talking head hiding behind a pair of shades and a suit that is likely worth more than most of us make in a month. As he cozies into his plush throne he’s ready to watch his favorite TV show, which just happens to be him emptying the pockets of a hard-working middle class man.

He’s in for a rude awakening, however, when he realizes that his regularly scheduled programming has been taken over by Soles of Passion. They’re not letting him off the hook, either. Rather than allow him to keep others from climbing the ladder by quite literally taking the ladder away, they do what nobody else has done. They hold him accountable for his actions. Out of his tax-funded throne and onto the roof of a downtown LA warehouse. All the dollars in the world can’t save him now!

For more information on Soles of Passion and the causes they so passionately champion, call Andy Gesner at 732-613-1779 or e-mail us at info@HIPVideoPromo.com . You can also visit http://www.SolesOfPassion.com/.

For info about other Soles Of Passion videos, click HERE