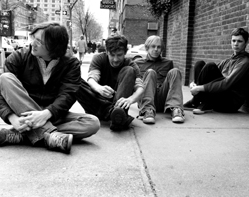 Greetings and salutations to all of my music video programming brethren! It’s Andy Gesner and the staff from HIP Video Promo, bringing you a video from a band whose name might be a mouthful, but we assure you the songs are succinct and sweet. Someone Still Loves You Boris Yeltsin makes insistently catchy guitar-pop music with just enough muscle to undergird the melodies and give their heavenly tracks a gritty indie-rock edge. Remember that thrill you got the first time you spun Murmur or Oh! Inverted World – that invitation into musical universe in which every element fit perfectly into place, and every tune promised to be more compelling than the next? SSLYBY do, and they’ve made an album of their own that shares the virtues of those recent classics. That the magic of this central Missouri five-piece: they’re able to generate wild excitement with humble materials by tapping into that great vein of American melodic invention.

Every song on Broom, the band’s debut, is a winner and a potential single. Perhaps “Pangea”, the lead track, got the most weblog buzz, but the gorgeous “I Am Warm & Powerful”, the wistful “Gwyneth”, and the irresistible Apples In Stereo-like “Oregon Girl” generated plenty of fevered discussion (and downloading) too. Peter Hepburn of Cokemachineglow calls Broom a ten-song bundle of melodic perfection, and “a terrifically enthusiastic lo-fi debut and a throwback to a better era of pop.” At Pitchfork, William Bowers concurs, and goes on to praise the band’s manifest sincerity and integrity. “You know what ‘I Am Warm and Powerful’ is? Warm and powerful. You know what ‘Travel’ Song” makes one want to do? Travel. That’s the thingamabob about SSLYBY: their story checks out.”

SSLYBY’s surface-level modesty and sonic immediacy belies their ambition. This is a band that placed a song (“Oregon Girl”) on The O.C. before they even had a record deal. In a month or so, this quintessentially American indiepop band will embark on their first European tour. Unlike some of the studio hermits who play this sort of music, the members of SSLBY are expressive and energetic live performers; passionate and committed when the stage lights are up, and friendly and approachable once the show is over.

That generosity is evident in the clip for “Pangea”. The members of Someone Still Loves You Boris Yeltsin” throw open the doors of the Springfield MO house where they recorded Broom. The clip is filled with loving, quotidian detail: murals on a slanted bedroom ceiling, a child’s green bench next to a spinet, opened beercans, brick-framed suburban gardens. This is the sort of house where you’d expect to find young musicians living and working, appointing each room with the kind of casual-yet-meaningful appurtanences that inspire creative thought. Their Weller Street is ablaze in autumn color – the street is lined with trees turning amber in September sun. The footage is presented as a series of still shots that speed by at flip-book pace: no actual motion is captured, but the video creates a feeling of great velocity. An acoustic guitar appears to be floating in air in the middle of the road; frame by frame, it speeds along the street, up the steps, through the door, and into the open and expectant arms of its owner.

Here at HIP, we are so stoked to be teaming up with our dear friends at Polyvinyl Records once again. The folks at Polyvinyl have always been the ones to bring us the most unique and the most deserving of underground artists. We are proud and honored to bring you this great new video from Someone Still Loves You Boris Yeltsin and expose this band to your viewers. We also have plenty of copies of Broom, so please don’t hesitate to get in touch if you would like to set up on-air giveaways.  If you need more info, call Andy Gesner at 732-613-1779 or e-mail us at info@HIPVideoPromo.com. You can also visit www.SSLYBY.com, or www.PolyvinylRecords.com to find out more about Someone Still Loves You Boris Yeltsin.