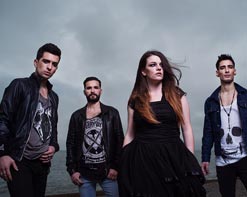 Together since late 2013, London’s SouLost have brought their different personalities into the studio and developed a fresh and unique sound which draws influences from modern rock and electronica. The deep sense of not belonging and disenchantment in their lyrics finds a perfect match in the powerful, yet melodic sound of the band.

And though much of their sound is crafted in the studio, they share the same passion when they perform live. They believe that one of their biggest strengths lies in the bond that they have established with their fans.

Critics said that The Way I Feel Pt. 2 marks an evolution of sound to create a heavier, more expansive sound that veers closer to melodic speed rock than the songs on its predecessor. Rebel Music Mag says “SouLost is an emerging band with a fanbase that is growing fast, the reason probably being their sound is fresh and ready for the mainstream.” The first single for “Without Me” gives us a taste of exactly what has driven fans and critics alike to sing the praises of SouLost.

The video for “Without Me” showcases the band and their exceptional live energy with vibrant shots of the band performing on a darkly lit and empty stage. The band has lot soy energy to give and perform for the camera with reckless abandon. Throughout the video a narrative plays out around a young girl who aimlessly wanders throughout the streets of London after being shunned by her alcoholic mother. Her sense of loneliness is something we’ve all felt at times, but like for many of us, music pulls her out of it when she stumbles upon SouLost and their inspiring performance.

We’re very excited to be working such a stellar group on an upward trajectory! Please let us know if there is anything we can do on our end to help get this video into your programming! You can contact the HIP Video Promo crew at (732)-613-1779 or email us at info@HIPVideoPromo.com .