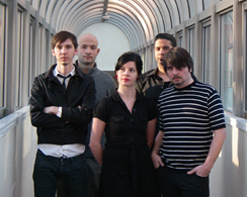 Greetings and salutations to all of my music video programming brethren! It’s Andy Gesner and the staff from HIP Video Promo bringing you another stand out video from an artist near and dear to the NYC music scene! In the past few years, New York City’s club circuit has been home to a shoegaze revival: bands taking their cues from Slowdive, MVB’s Loveless, Ride’s Nowhere and early New Order/Joy Division have married dreamy guitars and synth washes to dance beats and sound loops. They’re studio acts, but they aren’t intimidated by the stage – on the contrary, it’s become customary for a new shoegaze band to think visually, and to perform in front of psychedelic backdrops. With the release of the mesmerizing On High – an album that reached the top spot on the Tonevendor charts in late 2006 – Soundpool has quietly placed themselves at the forefront of this movement. And if you stumble upon one of their shows in a Downtown club, prepare to have your mind expanded by their self produced visuals. Live, Soundpool’s rhythm section of James Renard & Dean McCormick lay down a danceable foundation for John Ceparano’s saturated guitar and Mark Robinson’s ethereal keyboard to float on, while Kim Field sings with haunting, otherworldly detachment. This quintet has thought hard about the relationship between sonic texture and the filmed image, and they’ve learned how to amplify the trippier aspects of their music by pairing it with dream-drunk celluloid.

No surprise, then, that they’ve decided to shoot their first video themselves. The “Millions & Billions & Trillions” clip was directed by Kim Field and John Ceparano who are the two principal songwriters in Soundpool. They’re also the twin voices of the band, murmuring their gossamer-smooth lead vocals beneath a blanket of processed guitar and electronic effects. Ceparano is the beat doctor, composing most of the band’s loops, and handling much of the bass and guitar that gives Soundpool’s music such a characteristically cinematic sweep. Field is the frontwoman and winsome face of the unit – though she’s also known for her creative use of the Q-Chord, an electronic autoharp that she’s reclaimed from the forgotten future.

Several of On High’s fifteen tracks are strictly instrumental, and these succeed brilliantly: Soundpool effortlessly incorporates dub, space-rock, and synth-pop into their sonic tapestry. But the band truly shines on the more straightforward pieces. As sung by Field, the chorus of “Millions & Billions & Trillions” is intoxicating, mesmerizing, even catchy. The song is a meditation on the immensity of the universe and on human enterprise, and folded into the astral pop are some resolutely terrestrial concerns: overconsumption, reliance on oil, government by fiat. “Millions & Billions & Trillions” isn’t exactly a protest number, but it is a poem sent into the world by a young band aware of its surroundings.

Soundpool sets the “Millions & Billions & Trillions” clip in a location suitable for deep reflection: an old cemetery, busy with statues and monuments and countless gravestones. Yet, again, Field and Ceparano provide powerful contextual clues meant to tether the viewer’s exploration of innerspace to a real-world lodestone. For instance, we know exactly where we are — on the border between Brooklyn & Queens — because the Citibank skyscraper that marks the edge of Long Island City dances in the background of the final shot. Much of the footage is intentionally grainy, and Field is never shot directly – instead, we see her face from above, as she sings the words away from the camera. Forest footage is superimposed over the faces of the bandmembers, and sweep through their heads like untamed thoughts. The trees stand at attention, just like the tombstones: stretching in rhythm toward an event horizon somewhere beyond the limits of imagination.

Our introduction to Soundpool, John Ceparano, and the folks at Aloft Records has been a true pleasure for us and we’re very excited to bring this band the attention they deserve nationwide! We have lots of copies of On High for all of your on-air giveaway needs, so don’t hesitate to be in touch! We’re prepared to go the extra mile for these captivating musicians, so if you need more info call Andy Gesner at 732-613-1779, or email info@HIPVideoPromo.com.