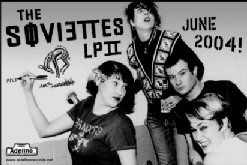 Hi everyone! It’s Andy Gesner and the staff from HIP Video Promo with more exciting news. We are thrilled to send you the latest video – and first from the soon-to-be-released LP II – from The Soviettes! We are very excited to once again team up with The Soviettes and the wonderful rockers at Adeline Records, as we did last year with The Soviettes’ high energy debut and programming favorite, “The Land of Clear Blue Radio”.

The Soviettes have torn through the Minneapolis punk scene with breakneck velocity. But then everything the quartet does is fast : their songs whizz by like bullets or telegraph signals, bristling with electricity, disciplined, energetic, edgy. Comprised of three women and one man, all of whom sing, the group offers a refreshing alternative to the male-dominated sameness of voice that dominates modern rock radio.

The group’s 2003 debut – titled, with characteristic unpretentious bluntness, The Soviettes LP – was a sleek rocketship, an explosive concoction of gigantic pop hooks, distorted guitar riffs, throbbing bass, and pounding drums. The fiery LP II ups the ante with songs that are rougher, catchier, and in most cases, even more succinct (of fourteen tracks, only three break the two-minute mark, and “Tonight”, at 2:22, is the marathon session here). It’s a wild joyride of an album, an adrenaline-fueled excursion through punk history comparable in scope and urgency to Green Day’s classic Insomniac. It’s unsurprising, then, that the band has found a home as one of the shining stars of Adeline Records, the label founded by Billie Joe Armstrong.

Much of The Soviettes LP communicated the excitement of the first blush of popular attention. The lyrics were exuberant and straightforward, even occasionally giddy. One year later, the group has toured and interviewed, received heralds and accolades, and has thus been forced to put some mileage between themselves and their own initially modest expectations. The tone of LP II is harsher, more critical; the original snotty-for-snotty’s-sake attitude has suddenly found definite targets. The group is still willing to send up the very concept of success (check out the crazed thrash of “Winning Is For Losers”) but in general, the tone here is darker, more mature, more specific and frightfully articulate.

“#1 Is Number Two”, the debut single, epitomizes the Soviettes’ newly refined approach. Assaultive and sugar-fixed, the song opens with a punishing bass line and builds from there. Awash in white-noise distortion and cymbal hiss, singer / guitarist Annie Holoien declaims with poise and passion. It’s a paranoid and cautionary story, wide-eyed and slightly unhinged, about the perils of ambition. One eye out for backstabbers and double-dealers, heads thrown back in fierce pride, the Soviettes storm through the song as if a breach in their momentum would be a concession of defeat. The determination is nostril-clearing.

The video clip for “#1 Is Number Two”, artfully directed by Justin Staggs, reflects back that intensity. It’s a performance clip, but there’s nothing naturalist about it – the band plays before a featureless bright white background reminiscent of those in early Eighties punk videos. Yet it’s not a dated, or nostalgic clip: just as the song gives its nod to the past before blasting off into modern territory, the white backdrop acknowledges a debt to the new-wave tradition without ever looking slavishly imitative.

Part of the credit for that goes to the group members, who perform with an attitude and ferocity that will be familiar to anybody who frequents modern indie rock clubs. But the clip uses digital technology to transcend the limitations of prior blue screen videos and to play a subtle trick on casual viewers. At first glance, the clip appears to be in black and white. Yet the closer you look at it, the more you realize that this isn’t true at all – washed-out colors bleed out from instruments, clothing, guitar straps, lipstick. The effect suggests an overexposed photograph in action: extreme contrast, stark difference between highs and lows, but details always present beneath the surface. Like the music of the Soviettes, it only appears to be simplistic – beneath an approachable surface lies a world of compelling detail.

It’s always an extreme joy to work with Amy Dunn and Adrienne Armstrong at Adeline Records, and big time thanks go out to them for bringing us onto the team for this full throttle music video experience. The Soviettes will be touring extensively this summer in support of their sophmore release, so if you’d like an interview the band or get a video ID when they arrive in your area, please let us know! As always, if you need more info call Andy Gesner at 732-613-1779, or email HIPVidea@aol.com. You can visit the Soviettes’ official site, or Adeline Records, using the links below.