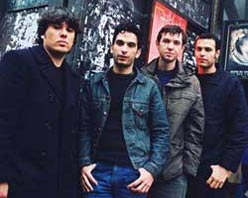 Greetings to all my programming friends! It’s Andy Gesner and the staff here HIP Video Promo HQ, checking in with another great clip from an emerging band deserving of a bigger audience. Here at HIP we all spent the late nineties admiring the unclassifiable At The Drive-In, marveling at the twists and turns in their compositions, and the unbridled emotional core of their music. While it’s hard not to rue the decision to put that group on hiatus, we can now all look forward to new albums from both of the bands formed from the dissolution of the favorite musical sons of “Hell Paso”: the adventurous Mars Volta, and the bold, stunning Sparta

Jim Ward, Tony Hajjar, and Paul Hinojos were the sturdy backbone of At The Drive-In, and since forming their own project, their gigantic rock sound has only gotten bigger and more polished. Sparta welds thick bass lines to a pile-driving backbeat, and adds layers of crunching guitar and sweeping synthesizer. Guitarist Jim Ward has become an extremely effective singer; soaring from note to note, screaming when necessary, communicating intelligence, desperation, and confusion with an unrelenting honesty. Porcelain, their second album, is a sparkling post-emo masterpiece; an ambitious array of melodic rock songs and accomplished performances.

On an album that examines strained relationships and miscommunication with such precision, lead single “Breaking The Broken” stands as a thematic centerpiece. Here, a vacation gone wrong becomes a metaphor for a dissolving romance between two busy people. Ward’s performance is a plea, a shout from the heart – yet it bears the mark of fatalism. “Feelings overshadow reason/blocks out everything”, he sings regretfully; “all that matters should be me and you”. He knows his heart is undermining his better judgment, but he can’t stop the relationship from fracturing.

The subtly provocative clip for “Breaking The Broken” reinforces the feeling of fragmentation, of things falling apart. The video opens with scenes of abandonment: empty bleachers, phones hanging off the hook, a basketball rolling across a deserted lot. The band plays on a bright white soundstage; lit from above, the group feels isolated, distended, lost in a space capsule. Jim Ward wails at the camera in loneliness and despair, desperation etched on his face. It’s a passionate performance, and a sympathetic one too, and it makes a strong case for the handsome Ward as a stealth pop star.

The “Breaking The Broken” clip makes recourse to the popular technique of splitting the screen – but it does so in a much more self-reflexive and playful way than what’s usually seen in videos. We’re shown the standard shot of four smaller boxes, but Sparta also experiments with alternate configurations. Occasionally, there are nine or more screens working at once, and they don’t always correspond to normal viewing patterns. This is videography that owes more to Piet Mondrian than to Hype Williams (in fact, there’s a moment in the video where Ward, leaning against a white background abutting a yellow wall, appears to have stepped into a Mondrian painting), and more to cubism than modern cinematography. The panels between frames are impishly violated from time to time – an empty swing begins on one side of the screen, and crosses the imaginary barrier into the other. Naturally occurring objects become screen-splitters: the rails in a fence, lanes in a swimming pool, a sequence of doors. We begin to lose the ability to discern between an artificial division between shots and a physical barrier. Hence, like Mondrian, Sparta continues to “break the broken”, dividing objects and ideas – and the lives they sing about – with lines that are simultaneously imaginary and all too impermeable.

One of our greatest joys here at HIP is the opportunity to work with Lisa Frank and Christian Taylor at Geffen Records. They are the best in the biz and have made the commitment to all regional programmers that any Sparta needs which arise will be met in a very timely fashion. The best part is that Sparta will be performing and playing a big role in this year’s CVC Conference in New York City. Any programmer planning on attending the conference will be shown tons of Sparta love! If you need more info call Andy Gesner at 732-613-1779 or email info@HIPVideoPromo.com. You can also visit Geffen Records orthe band’s own website to find out more about this excellent band