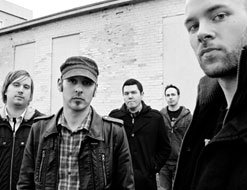 Hey there, dear programmers! It’s Andy Gesner and the whole HIP crew excited to let you in on another directorial masterpiece by Justin Staggs. He’s the go-to director when it comes to enticing visual effects (think the recent Melismatics’ video for “Digging Deep”), and now he’s got another stunning video to tout around courtesy of Standard Thompson. That video is called “Fireworks,” and you won’t be able to tear your eyes away.

Staggs sets up the video in two scenarios: the first is Standard Thompson playing in a nightscape surrounding with the full moon illuminating them from behind, and the second follows a young couple who start off frolicking around in an empty field in the middle of a warm afternoon. While Standard Thompson performs, you witness the clear fireworks apparent between the guy and girl as he picks up a daisy for her and they lay on a picnic blanket, watching the clouds pass by and falling asleep in each other’s arms. It turns out though that once it hits night, this budding love isn’t so innocent as the girl wakes up and plays a wicked game of hide and seek with her suitor. Little does the guy know what he’s going to find as a twisted ending leads to the girl shifting to a werewolf with her eyes on the prize.

With the rest of the entertainment industry capitalizing on the vampire-werewolf crazy – from Twilight to True Blood – you would likely be preparing yourself for some overdone CGI or overall dramatized effects. However, Staggs has impeccable timing when frontman Mike Hjelden belts, “It’s not so bad, oh my god, take a step back and look what you have,” and the way he hones in on the silhouettes and the aftermath makes it hard to group his vision with anything else out there.

Indeed, Standard Thompson found themselves the perfect team when it comes to their video for “Fireworks.” This Minneapolis quintet plays their power pop at the forefront of the clip with tons of energy. Surely, Standard Thompson has all the confidence in the world to pull this off. The band started way back in 1996, and despite the member shakeups, they still have accolades to their name. Standard Thompson’s music has been played during the 2006 Super Bowl halftime highlights, in addition to having numerous MTV plays on the network’s shows. They even once shared the stage with Dogstar (the band in which Keanu Reeves played bass long ago). And now that Standard Thompson’s fourth album is out, they’ve got a lot to look forward to. As WeTheChamelen.com noted about More Noise For The Broken Hearted, it “is the right meltdown of a certain pop punk a la Quietdrive with some hit parade adult alternative like The Calling’s … This record will make you sing for its whole (short) length.”

We’re pumped to be working with Standard Thompson (and Staggs again, for that matter) and can’t wait to see what this video will bring for the band. If you need more info, call Andy Gesner at 732-613-1779 or e-mail us at info@HIPVideoPromo.com.