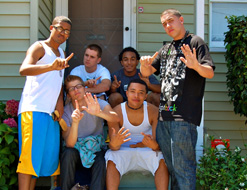 What’s up everybody? It’s Andy Gesner and the staff from HIP Video Promo, here with a lively new clip from a California rap crew with infectious enthusiasm and personality to burn. The Starting Six represent the Eastern Bay Area, and they do so with youthful exuberance and delightfully mischievous attitude. They’ve got the easy camaraderie of high school pals; they’re all instantly-identifiable and endearingly fraternal. Their radio-ready hooks and boisterous raps have already made them local favorites and viral-video stars — “Jackie Chan”, their most recent single, even added a new term to the lexicon of city slang (it’s short, if you’re wondering, for the group’s favored combination of Jack Daniels and Coca-Cola.) Now comes “Thirsty” — a brash come-on that threatens to be the act’s most successful cut yet. The beat is electrifying, the vocal effects provide an instant sonic signature, and the randy party rhymes are brash, clever, and frequently hilarious.

Don’t confuse Starting Six with the joke-rap crews, though. Though the Lonely Island isn’t a bad point of comparison for the playful combo and their style, these guys have their eyes fixed on the Billboard charts, and we are confident that their up coming Me-A-Ham EP will be step in the right direction. If their verses suggest that they refuse to take themselves too seriously, that just puts them in good (and refreshing!) company. Like Drake, they radiate easygoing collegiate charm; like Doe.N.Reezy, they’ve got a comfortable, back-and-forth flow that suggests respect and deep mutual familiarity. In “Thirsty”, emcees NicNac and Big Steve trade lines, go back and forth, and bounce couplets off of each other; it’s all completely natural, and that’s part of what makes it so exciting to hear. Each rapper is individuated in the song — a tough thing to accomplish when you’ve got six voices to balance! — and you’ll walk away from “Thirsty” with a clear idea of who’s who among the Starting Six. Better yet, you’ll realize that this unit is at its best when they all arrive at the party together (for the uninformed, the Starting Six is Big Steve, RyBread, GreyGoose, Fess, Riggz, and NicNac). Need more proof, check out their clips online from their sold out 500 person show recently!

The multiethnic Starting Six looks like the Bay Area: these are guys you might encounter on city sidewalks, basketball courts, and nightclubs anywhere in Northern California. They approach the camera with the same enthusiasm and irreverence that characterizes their music — and director Chris Morocco has captured that irresistible force in his clip for “Thirsty”. Morocco specializes in glossy-gorgeous MTV-friendly clips for up-and-coming Cali rappers (he’s shot videos for Mighty Mobility, APB, and the explosive Nova Boy), and he’s definitely brought the fire for “Thirsty”. He’s packed the beach house with beautiful girls, dressed them in bikinis, brought in the bottles, and set the boys loose. But there’s nothing unruly about this get-together: the Starting Six might talk rude, but they just want to have a good time.

In so doing, they also cheekily undermine a long-standing video convention. It isn’t uncommon for the video director to single out a particularly hot girl and give her the spotlight. She’s shot with all the rappers in the group; she’s the star, and the most visible piece of eye candy. The girl who does the honors in the “Thirsty” clip is plenty worthy — washing a car, dancing, or just sitting at a cafe, she’s something to see. Everything’s fine until the end of the video, when the emcees realize what’s happened: “we all got the same girl’s phone number”!

We’re psyched to be working with the Starting Six crew to bring you this raucous new clip. Don’t hesitate to contact our office at 732-613-1779, email us at info@HIPVideoPromo.com to find out more about Starting Six.