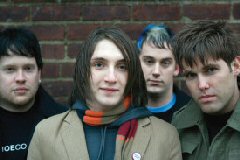 Hello programming pals! It’s Andy Gesner and the staff from HIP Video Promo once again. It’s started warming up here on the East Coast – the birds are singing, and all the windows are open. But the hot days don’t really start until May 10 – because that’s when The Starting Line is set to release their newest record Based On A True Story. Anticipation among emo-pop and modern rock fans has been off the charts: even by the high standard of bands affiliated with Drive-Thru, TSL has a rabid fan base. We’re proud to be working with Geffen Records to bring the quartet’s latest video to a wider audience.

But, honestly, The Starting Line doesn’t need much help. The young (all of the members are still in their early twenties), photogenic and relentlessly tuneful Pennsylvania quartet is the sort of band that inspires love at first sight among their equally fresh-faced listeners.Say It Like You Mean It, the group’s electrifying 2002 debut, sold 300,000 copies – and reached number one on the Billboard Heatseekers chart – with no radio play other than the support of their hometown Y100 (and tons and tons of Jersey fans). After touring inexhaustibly after its release – including 2002 and 2003 stints on the Warped Tour – it’s anybody’s guess how many copies of Based On A True Story the group will move.

“Bedroom Talk”, the lead single, feels like an ideal summer jam: edgy enough to attract the punk kids, but with enough candy-coated pop hooks to make it a shoo-in to pour out of speakers on beaches across the country. The chorus is irresistible, and shaggy-haired, smiling frontman/bassist Ken Vasoli sells the sentiment with a vocal performance caught somewhere between tuneful enthusiasm and manic lust. It’s a song about first times and their consequences, exuberance, long nights, “getting the talk” and knowing what to do with it. Like everything by The Starting Line, it’s refreshingly honest, impatient, passionate, and perhaps even a little bit innocent.

When he finally finds his girl, she gets on top of him and throws a golden sheet over both of their bodies. It’s a happy conclusion to the chase, but there’s also an implication of smothering and confinement. Throughout the video, there is a prevailing sense of claustrophobia – the party is too crowded, the rooms are too small. The band plays in a tight cubicle of a room, and the walls seem to close in on them as they strike their instruments. Is Vasoli’s berserk sex drive enervating, or is it suffocating him?

It’s always a pleasure to work with our dear friends Lisa Frank and Christian Taylor at Geffen Records, and we’re thrilled to team up with them again to bring you this outstanding video. We will have plenty of copies of the Based On A True StoryCD for you to give away to your loyal viewers. The band has a few more shows scheduled this spring before embarking on Warped Tour in June. We’d be happy to set up a video interview or video ID when this youthful band is at a venue near you. If you need more info, call Andy Gesner at (732) 613-1779, or email info@HIPVideoPromo.com. You can also visit www.Geffen.com, or www.StartingLineRock.com to find out more about these rising stars.