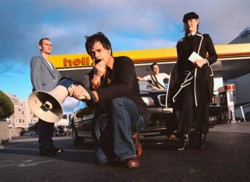 Greetings to all of my video programming pals – it’s Andy Gesner and the staff from HIP Video Promo, here once again with another great pair of videos from a very intriguing emerging group. Possessors of a clearly-defined social conscience as well as a great chord vocabulary, The Heavenly States are a thinking-person’s band. But they’re also excellent instrumentalists, writers of maddeningly catchy melodies, and generous dispensers of the tastiest ear candy. From their energetic, detailed, and inventive recordings, you might get the impression that they’re a studio-centric band. Yet the States were voted the best live act in the San Francisco Bay area last year – and as any Golden State loyalist knows, that’s in the face of some hefty competition.

The unconventionality of the group extends to their choice of business partners. The Heavenly States, their effective debut, was released by the Aussie label Baria Records. The States are no strangers to Down Under – their 2004 tour of Australia was a resounding success, and helped build the young band a following that can legitimately be called worldwide. Any group featured on a split single with The Postal Service and Coldplay (their “Devil In The Woods” 7″ release was the B-side to a live version of “Clocks”) is keeping some lofty company. They belong there. This is a band on the rise.

The typical Heavenly States song features a deceptively simple presentation of a complicated idea. Singer and lyricist Ted Nesseth sings his fragmentary but resonant lyrics in a questioning baritone, and slams away at his six-string with punk abandon. Matt Dickey and Jeremy Gagon form a rhythm section poised and supple enough to keep up with Nesseth’s cavalcade of ideas. But the band’s secret weapon is synthesist and violinist Genevieve Gagon. Running her strings through a bewildering array of effects, Gagon creates soundscapes that are alternately stratospheric and infernal. Not since the heyday of fellow Bay Area rockers Camper Van Beethoven has an indiepop band made better or more prominent use of an electric violinist.

Unsurprisingly, the States release videos that are as offbeat and striking as their songs. The “My Friends” clip begins with an abduction of a yuppie, and ends in a hot tub filled with topless women. In between, Nesseth addresses the camera with an open-faced guilelessness: he stands on the macadam outside of a gas station where the sign keeps changing from “Shell”, to “hell”, and later on the deck of a warship where he’s repeatedly shouldered by middies. The cuts are quick, and somewhat destabilizing – they happen in the middle of lines, the backdrop altering slightly behind him. When the song reaches its crazed, echoed violin solo, the camera pulls back to capture blurred images of the band against a high, blue sky. Shot cinematically, and with great attention to detail, it’s a portrait of a group in firm control of its own conceptual arithmetic.

As an added bonus – and to be sure you get all sides of this very complex and interesting new band – we’ve included as a bonus the video for “Car Wash”. This clip was directed by veteran animator Ernie Fosselius, who made the hilarious parodyHardware Wars and was also the mastermind behind the classic “1,2,3,4,5…” Pinball Counting sequence on Sesame Street. Unlike the slow and careful “My Friends”, “Car Wash” is a blast of caffeinated sound – a bruising start-stop verse, nuclear-meltdown synth noises, an electric violin lashing like a whip, and an indelible singalong chorus. Here, the polemical side of the Heavenly States is more apparent: the clip opens with a satirical address by a Dick Cheney puppet. The song begins and the camera swings – and we’re treated to a concert performed by an all-marionette version of the band.

After over a year of negotiation, The Heavenly States will be the first American rock band EVER to perform in Libya. (In fact, the last American musical act to perform in Libya was entertaining General Patton’s troops in 1943). All proceeds from the show will go to the Tsunami Relief effort. That’s how cool and how very special these folks are. The band will also be performing two shows in Cairo and a UK Tour immediately afterwards.

The Heavenly States will be playing SXSW and returning for a US tour in the Spring, and we’ll be thrilled to set up interviews or video IDs for you. We send out huge thanks to Eugene Bari and the crew at Baria Records for including us in this bodacious video promotion. We have plenty of copies of The Heavenly States CD and a supply of signed posters for giveaways. We’ve had great success working with the folks Down Under before, and we’re confident we can do so again. If you need more info, call Andy Gesner at (732) 613-1779, or email info@HIPVideoPromo.com.