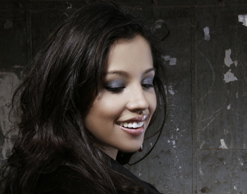 Greetings to all my cherished music video programmers far and wide! It’s Andy Gesner and the staff from HIP Video Promo here with a contemporary pop clip that’s anything but ordinary. We all know the feeling of disorientation that accompanies a breakup: the whole world seems to be aching, dreamlike, enveloped in cloud. Plenty of pop songs have attempted to conjure this sensation, but we’re not sure we’ve ever heard it realized more convincingly than it is in Stefani Vara’s radiant “Water”. The surface of this radio-ready ballad seems to shimmer with longing – and Vara’s heartbreaking performance is understated, breathless, sultry, intoxicated with regret. Vara’s debut has all the qualities of water: it’s mysterious, flowing, beautiful, reflective. No 2008 single is more appropriately named.

Though Vara’s songs have the freshness, depth, and emotional intensity we normally associate with indie music, her aspiration – and her destination – is the very top of the pop charts. Stefani Vara is most reminiscent to artists like Alicia Keys and Rihanna: singers whose poise and integrity are never sacrificed despite their mass appeal. On Storybook Diaries, her debut album, she’s worked with some of the most accomplished songwriters and producers in contemporary music: Insomniax (JoJo, Bobby Valentino), Matheau Gordon (Rihanna), and Johann Elliott (Pussycat Dolls), just to name a few. Like many of the songs on Storybook Diaries, “Water” was co-written by the accomplished Chauncy Jackson, an artist-entrepreneur who has along with co-writer Kim “KC” Croft has penned hits for Tamia and Katherine McPhee.

It’s hardly surprising that so many industry veterans would want to collaborate with Stefani Vara – she’s got the sound and the look of a superstar. The stunning Vara has also built an impressive portfolio as a model and spokeswoman: among others, she’s represented Verizon, Adidas, and Azzure Jeans. She’s got the kind of face that dominates every frame she graces, and Lindsay Steven Mann’s empathetic clip for “Water” wisely focuses on her astonishing beauty. It tells a story, too: the tale of a painful breakup and the palpable feeling of absence in its wake. Vara plays the part of the heartbroken lover so convincingly, you’ll swear you’re peering into an unfortunate chapter of her life.

The clip opens in Stefani Vara’s apartment; she’s alone in bed, gripping a silver lamé pillow with her eyes closed, thinking about what she’s lost. She imagines the presence of her ex-boyfriend – face down next to her, sitting with her in the kitchen, picking sneakers out of the closet with her, walking up behind her as she prepares for the day in the bathroom. “How can I erase the thought of you?”, she asks the camera, still in that halfway-state between sleep and wakefulness. Director Mann reinforces the hallucinatory quality of the clip by repeating shots of Vara and shooting her from different angles; it’s like one of those reoccurring dreams where you think you’re getting up and starting your day, but you’re really in bed, imagining it all. Later, she releases the pain and seems to have moved on – she’s well-dressed and fully made-up, and she looks fantastic. Yet she’s still alone, and still despairing. In one remarkable shot, Vara sits barefoot and distraught by the tub, water running behind her. Black marks cover the floor of the otherwise immaculate bathroom in her stylish apartment: a sign of something forever stained.

We’re super appreciative of Chauncy Jackson, Michael McWilliams, and the hardworking staff at Siri Music Group for delivering us this spectacular video. Please don’t hesitate to reach out to us if you would like to secure a copy of Stefani Vara’s album Storybook Diaries for contests or on-air giveaways, or if you would like to set up a video interview with her when she visits your market. If you need more info, call Andy Gesner at 732-613-1779 or e-mail us at info@HIPVideoPromo.com. You can also visit www.SiriMusic.com to find out more about Stefani Vara.