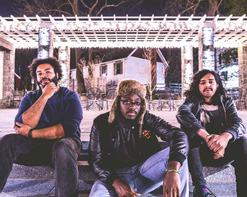 “The power or right to act, speak, or think as one wants without hindrance or restraint.”- Google’s definition of freedom. But what does freedom mean to you? For some, it’s a feeling, for other’s it’s an action. For indie/alternative band, StereoRiots, it’s been a coming-of-age tale that begins in the capital of the United States, Washington D.C..

StereoRiots started as the brainchild of lead singer/guitarist, Wahid Hashime and bassist Jey Williams. After a successful Craigslist advert, these two hungry musicians began crafting original material with swagger and edge, which led them to enlisting drummer, Moe Sesay as the backbone behind the kit. Rounding out the lineup was Erica Yu on Keyboard and synth, providing the glimmer of sunshine needed for their all-organic timbre to blossom. But it wasn’t until they were discovered by Austin Bello, bassist of scene sweethearts, Forever The Sickest Kids, that they achieved the fully-realized StereoRiots sound. In 2014, Bello produced the band’s first EP entitled, Intervals.

By the time Intervals was circulating through the underground, Jorge Ramirez had replaced Yu on key duties, Chris Ruffin stepped in on bass, and the SR name was spreading like wildfire, opening up live opportunities at historic venues like the 930 Club and the Howard Theatre. But in this industry, success rarely comes without heartbreak, and in 2016 their hearts were shattered when founding member, Jey Williams stepped away from the band. His departure left the group at rock bottom, even though their popularity was at an all time high. Fast forward to 2018, StereoRiots’ new single, “Ghost Machines” is not only their redemption song, but the band’s battle cry as they opt to persevere and take on the world with music as their weapon.

As the lead single off the forthcoming, Monsters On The Moon EP, “Ghost Machines” is an ambitious seven minute journey, that takes you from your absolute lowest, picks you up by the collar of your shirt and throws you into the ring with your mortal enemy: yourself. The unending pressure of “normal” society can seriously weigh down on the wandering minds of creatives. StereoRiots, along with the sage wisdom of producer, Ben Green, aim to inspire you to take destiny into your own hands and remind you that you are the author of your own life story. The cinematic music video for “Ghost Machines” showcases people from all walks of life, stuck in a rut, wishing there was another way. It becomes evident that all these people share a common light inside of them, the kind of force of nature that once released, cannot be stopped. Will the light guide these troubled souls to freedom? The answer lies within.

Here at HIP Video Promo we’re profoundly thrilled to share StereoRiots’ declaration of independence with the help of the wonderfully crafted, fully realized “Ghost Machines” music video. It’s our sincere hope that you and your viewers will embrace the “Ghost Machines” clip, share it on your socials, and add it to your programming in a timely fashion. Rest assured we will have plenty of outstanding StereoRiots merch to set up online/on-air contests and giveaways throughout the campaign. Don’t hesitate to let us know what we can do to help you spread the musical and visual mosaic that is StereoRiots. Please contact Andy Gesner and the HIP Video Promo team at (732)-613-1779, email us at info@HIPVideoPromo.com. You can also visit www.StereoRiots.com for more info on StereoRiots.