Steven Pasquale “It All Fades Away” 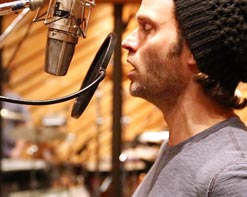 American actor Steven Pasquale is best known for his role as a somewhat dimwitted and slow, yet brave and skilled NYC firefighter in the critically acclaimed series Rescue Me. Pasquale’s Robert Kincaid, the lead male heartthrob in the critically acclaimed Broadway production of the Tony Award winning The Bridges of Madison County, is a different beast altogether – artistic, progressive, and solitary. However, fans of this multifaceted talent are not the least bit surprised that Pasquale stepped front and center into the role, playing opposite five-time Tony nominee Kelli O’Hara. With his wholesome, organic style, he sings and performs “It All Fades Away” as if it all comes too easily to him. HIP Video Promo is pleased to introduce the powerful video clip for this astounding star turn.

Pasquale made his acting debut on the HBO series Six Feet Under. Steven has also starred in films, such as Aliens vs. Predator: Requiem. With this much acclaim for his on screen work, many fans of this actor don’t realize how abundant Pasquale’s career in theater has become. He has starred in numerous productions, including The Light in the Piazza, The Spitfire Grill, and Miss Saigon.

For over a decade, Steven Pasquale has created roles, introduced songs, and made appearances in well-known Broadway performances alongside fellow actors and actresses such as Michael Arden, Jaclyn Nedenthal, Will Chase, Celia Keenan-Bolger, and Max von Essen to name a few. Pasquale’s 2009 debut album Somethin’ Like Love invoked these musical stage roots. Since then he has made many television appearances, but has continued to hone his theater skills, most notably in The Bridges of Madison County production that won this year’s Tonys for Best Original Score and Best Orchestrations.

Strengthening his vocal range and showing the world what he has to offer, Steven Pasquale excites and inspires music fans and theatergoers alike with his enlightening vocals in “It All Fades Away.” Defined as his “11 o’clock number,” the song is performed in the recording studio accompanied by a 13 piece orchestra. The clip translates the powerful art of theater through the intimate setting of the recording studio.

We are very excited to bring you this extraordinary talent in such a natural and organic setting, and we are confident you and your viewers will agree that this performance is not to be missed! Please contact Andy Gesner and the HIP Video Promo staff at (732)-613-1779 or email us at info@HIPVideoPromo.com . You can also visit www.GhostLightRecords.com/ for more info on Steven Pasquale and The Bridges of Madison County (Original Broadway Cast Recording).