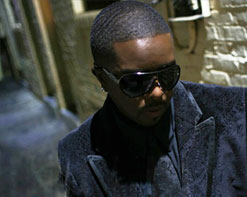 Hey everybody! It’s Andy Gesner and the rest of the HIP Video Promo staff bringing you a clip that’s an ode to old school R&B through and through. And when that comes from an artist who spent the first 10 years of his music career as the lead singer of a chart-topping R&B group that started in the late eighties, you’ve got to figure he knows exactly what he’s doing. In this case, we’re talking about Steve Russell, a member of the group Troop, and his intriguing video for “Bring It Back.”

Steve Russell is just the latest artist to take the short film approach with “Bring It Back.” What you first see is Steve Russell getting out of jail and picking up a pay phone – with no one on the other line. He takes a trip over to a record store, where a customer gives a nod to Troop before Steve Russell is greeted by a woman who is less than enthusiastic to see him. This woman later mentions, “You know he’s a teenager now,” before handing Steve Russell an MP3 player and giving some last-minute advice. The video takes a break in the dialogue and kicks right into the music as Steve Russell walks around his old neighborhood, gets a post-jail makeover in his local barbershop and has hallucinations of the same woman from the record store. Eventually, he runs into a group of teenagers on the street – one of them who just happens to be his son. Just when you think an altercation between the estranged duo is about to take place, Steve Russell breaks into an old school dance off complete with pop-and-locking. There’s a bit of a cliffhanger in the end with Steve Russell walking away from his son as the words “To be continued …” crawls across the screen.

It’s this fun take on R&B dance that Steve Russell has been a veteran of for more than 20 years. He’s got a career that cannot be rivaled, which first started with him garnering No. 1 singles like “All I Do (Is Think Of You)” and “Spread My Wings” with his former group Troop. He spent the second half of his career writing and producing songs under the guidance of R&B legend Kenneth “Babyface” Edmonds before joining the successful production team The Underdogs and contributing work to music industry giants like Chris Brown, Jordin Sparks, Justin Timberlake, Beyonce and Aretha Franklin.

And now comes the next phase of Steve Russell’s career. He left The Underdogs last year to create his own production company, The Motel Media Music, and finally ventured out into his own solo project. “Bring It Back,” which was co-written with Kandi Burruss (formerly of the R&B group Xscape and a current cast member of The Real Housewives of Atlanta) is bound to be a dance club favorite. It’s also a simple taste to what Steve Russell has in store with his new album, So Random, set to drop later this year.

We’re thrilled to be working with Steve Russell to help spread the word about his new video and excellent new record, So Random. If you need more info, call Andy Gesner at 732-613-1779 or e-mail us at info@HIPVideoPromo.com . Y