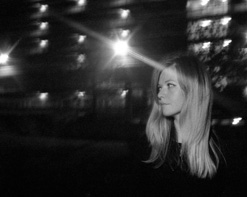 Time to drift away into a dreamy, hazy paradise, programmers! It’s Andy Gesner and the HIP Video Promo staff here with a video that begs to make sense of the confusing atmosphere around us, but isn’t afraid to give into it and become blurred in the haze of its own madness. We thank Sub Pop for discovering and bringing us all an ethereal treat all the way from London. Still Corners is the dream-gaze group that’s got all the critics stirring with their must-hear new single “Cuckoo.”

Many bands lay claim to the adjective “cinematic.” But how many can claim a truly cinema-worthy moment as part of their inception? It was a dark and foggy night when Still Corners songwriter Greg Hughes first laid eyes on vocalist Tessa Murray. “It sounds stupid but it’s completely true,” he recounts. “I was on a train that was going to London Bridge. But for some reason it went to this other stop. And I got out, and this other person got out. It was Tessa.” This great affection for atmosphere is what already earned Still Corners so much critical attention in a short burst of time. Highly influential underground blog Gorilla Vs Bear has posted several times about the group describing them as “gorgeous, swirling new dream-gaze gem.” The Guardian made them their “Band of the Day,” openly asking “are these wafty British etherealists heralding a new golden age of indie?” NYLON Magazine swears by Still Corners, stating that Tessa has “one of the most gorgeous voices we’ve heard in a long time.” This sort of praise continues all around the board with shouts from Pitchfork, Stereogum,AbsolutePunk, Consequence of Sound and many more.

“Cuckoo” is the leading single from Still Corners’ upcoming album Creatures of an Hour. The song shines in its simplicity, a single drumbeat, ghostly guitar, and distant organ highlighting Murray’s haunting soprano. Like any good dream-gaze song should, “Cuckoo” steals its listener away to its faraway valley and expanse, allowing the mind to wonder freely amongst the track’s various colors and textures. The video portion of this number only adds to the desired effect – featuring Tessa in a series of repeated ghostly motions. Despite her form as an apparition, the clip is never scary, and instead, inquisitive, sensual and colorful. This clip will have viewers wondering in mystery, asking questions like: “Am I going crazy?” “Does this person like me?” “What’s happening?”

Creatures of an Hour will be hitting the marketplace October 11th, and Still Corners are already wasting no time touring behind the release. The band is currently traversing the States throughout the fall season before heading back to the UK. We will be sure to get you some copies of the new record and any other Still Corners goodies upon request, so don’t be shy if you’re as possessed by this group as we already are! If you need more info, call Andy Gesner at 732-613-1779 or e-mail us at info@HIPVideoPromo.com. You can also visit www.SubPop.com or www.StillCorners.com to find out more about Still Corners and any tour dates near you.