The Streets “Fit But You Know It” 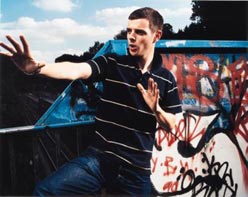 Hello everybody! It’s Andy Gesner and the staff from HIP Video Promo checking in with yet another high profile music video promotion completely worthy of your undivided attention. We’re thrilled to be working with the hottest act to emerge from Britain since Blur – The Streets. The Streets debut, the million sellingOriginal Pirate Material, stormed playlists on both sides of the Atlantic in 2002. Listeners worldwide were mesmerized by the collection of engrossing, inimitable UK dance music: a magnificent array of colorful, moving stories from working-class England, spun by a kid with a vocal delivery for the ages. Combining elements of British garage, American hip-hop, Euro electronica, and international pop, Streets auteur Mike Skinner created a musical voice that felt like something thoroughly new – literate, humorous, cinematic, infectious and deeply compelling. Critics agreed, bestowing a coveted Mercury Prize nomination upon Original Pirate Material.

Could Skinner deliver an encore to such a singular statement? We’re pleased to say the follow-up is in, and the answer is a definitive yes.A Grand Don’t Come For Free (VICE/Atlantic Records), the sophomore release from The Streets, is magnificent, sweeping and operatic in its scope. A cycle of tracks about love, loss, risk, and trust – played out amidst a backdrop of hazy Midland raves, Ibiza sunshine (Ibiza is a Spanish island well known for it’s incredible dance clubs and electric nightlife), seedy London pubs and betting-parlours – A Grand Don’t Come For Free builds on the intensity and narrative charge of the debut, and is destined to become a classic that transcends genre and keeps on pushing things forward.

“Fit But You Know It”, the first clip from the highly anticipated new CD (due to be released stateside on May 18th), echoes the lighter side of Original Pirate Material. Skinner is deep, but he’s also hilarious, and his stream-of-consciousness, first-person Everyman storytelling (think of a new millennium UK version of Bruce Springsteen circa Greetings from Asbury Park) skips from trenchant observations to witty reflections with the imaginative dexterity characteristic of the best emcees. In “Fit But You Know It”, Skinner’s on vacation, away from his girlfriend, finding it impossible to keep from scoping an attractive woman. Typically self-deprecating, Skinner questions his motives, hesitates, and ultimately watches with mixed emotions as the object of his covert attention ends up in the arms of a scurrilous muscleman. As always, he’s fabricated a track that perfectly matches the story: a grungy guitar loop (reminiscent of David Bowie’s anthemic “Jean Genie”) and stuttering beat that sounds like frat-rock gone terribly awry.

Skillfully directed by Dougle Wilson, the clip for “Fit But You Know It” takes his Ibiza reflections to their logical extreme: we follow the sharp-tongued Skinner to the local photo lab to pick up his vacation pictures. In the video for “Let’s Push Things Forward,” the dub-tinged single from Original Pirate Material, the unpretentious Skinner walks the urban streets, rapping to the camera in his casual, sing-song cadences. In the new video, we’re stalking the neighborhood thoroughfares with Skinner again – but he speaks to us from the thumbed photographs, as the still images come to life like animated memories. Intriguing British slang permeates this vid throughout and lodges in our American craniums like an incessant pop hook. Skinner proves once again why he’s one of the most endearing video subjects working in pop music today – his performance is warm, human, funny and intensely sympathetic. He paces the streets because his characters do; he’s part of the city-scape, he’s the bloke on the corner with a story to tell and his last pounds riding on Manchester United.

The success of Original Pirate Material gave The Streets a foothold in the States, and opened American ears to a new sound. Subsequent stateside interest in artists like Ms. Dynamite and Dizzee Rascal suggest that the age of the British emcee is just beginning to dawn and take hold here “across the pond”. Mike Skinner is the foremost proponent of the form, and its modestly shining star. A Grand Don’t Come For Free and “Fit But You Know It” are poised to blow America wide open for this important, literate – but always entertaining – young artist

It’s genuinely difficult to put into words how fortunate we feel here at HIP Video Promo to be working with Adam Shore at VICE Recordings, Doug Cohn and Diane Van horn at Atlantic Records and Mike Skinner and his mates from The Streets on this eclectic visual statement of provocative debauchery. This is a very special campaign for us and we are fully prepared to make sure all of your Streets needs are fulfilled in a timely fashion. Call me at 732-613-1779 or e-mail info@HIPVideoPromo.com to get in on the action.