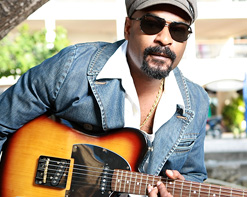 One would be hard pressed to find a harder working artist than Stuart Wilson. Born in the Cayman Islands, currently living in London, and touring across the globe, his undeniable passion for reggae, jazz, blues, and fusion has landed him not only on some of the choicest stages, but also teamed him up with some of the most sought-after producers on the planet. His brand new video for “Real Come Back Story” exhibits not only his exceptional talents, but also his positive world view and energy.

The guitarist/songwriter lived a comfortable life as a journalist when he did something most aspiring musicians only dream of; he left his 9-5 to become a full time musician. Of course, it was only a matter of time with Stuart’s resume. He’s shared the stage with acts like Damian Marley, Shaggy, Beres Hammond, Michael Bolton, Roberta Flack, Sean Paul, and John Legend as well as hitting the studio with industry giants like Grammy Winner Jason Gilbert (of Eminem Recovery fame), Sly Dunbar, Dean Fraser, Rorey Baker and the Next Room Productions in London City. Most recently, Wilson has teamed up with legendary Producer Clive Hunt, whose credits include Peter Tosh, the Rolling Stones, and many other super acts. Pair all of that with positive press at locations such as the Hitz 92 FM Chart, Ron Muschette’s World Reggae Music Chart, Hype TV’s video countdown, Tempo’s video countdown, RE TV, Flow and others, in addition to robust airplay on stations such as Sun City and Irie FM, it’s no wonder that music commanded his undivided attention.

Stuart is not, however, just a flashy name dropper who only talks the talk. He also walks the walk in the form of a relentless tour schedule. From London to the Caymans, and from Thailand to Canada, Stuart Wilson and his band bring the connection straight to their audience with a live show that creates a cascade of sound that is the backdrop to what is a distinctly unique vibration that Wilson says is something that happens when all the elements come together.

“Real Come Back Story” is Stuart showing the world around him, specifically anyone who may have doubted him in the past, you just can’t keep a good man down. Throughout the video, Stuart’s story of coming back from the brink is played out in a variety of scenes of various actors and actresses. The vagabond scores a handsome pay day. The lonely man lands a gorgeous babe on his arm. The hits keep coming, and all the while Stuart and his pair of brass-toting beauties are there to provide the soundtrack. It’s an uplifting track that reminds everyone to keep their heads up when times are tough, because good fortune might just be right around the corner!

We are very excited to have to the opportunity to work with Stuart Wilson and his crew to bring you the new “Real Come Back Story” video. We are here and eager to help get it into your programming, so please don’t hesitate to get in touch and let us know what you need from us to make that happen. Please contact Andy Gesner and the HIP Video Promo team at (732)-613-1779, email us at info@HIPVideoPromo.com or visit www.StuartWilsonMusic.com for more info on Stuart Wilson.