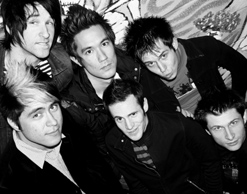 Hello music video connoisseurs, it’s Andy Gesner and the staff from HIP Video Promo, here with a new clip from a Southern California band that never fails to entertain. Suburban Legends are a portable party, and have been for the better part of this decade. To keep the crowds moving, they’ll play pop, funk, disco, old-school and thirdwave ska, and even hard rock – and to keep their gigs exciting, they’ve become proficient in all of those styles. Suburban Legends shows incorporate choreography too, and singer Vincent Walker’s dance routines are visually arresting and wholly convincing. Audiences at Suburban Legends gigs have come to expect skit-style lunacy, elaborate physical comedy, stunts, and other over-the-top theatrical elements. In short, it’s the type of act you can’t ignore; one made to catch the attention of passersby. It should be no surprise, then, that this septet has made a name for themselves as one of the hardest working touring bands around, already playing over 180 shows in 2007.

But while the Suburban Legends live show is a kinetic calling-card for the group, they’re an accomplished recording act, too. The band has moved 30,000 units of their catalog, all without label or retail support (we’re talking live shows and online only here, people!). Releases in Japan and the United Kingdom testify to the group’s international appeal. Infectious, their latest full-length, is a nine-song riot of brass, big guitar, and crisp pop hooks. Think of a more accessible and disciplined version of Reel Big Fish and you’re halfway there – the rest is the Suburban Legends’s own wild invention.

Many indie acts have had a rocky transition to commercial radio. Suburban Legends, on the other hand, are nearly there already: beyond the horn charts and guitar upstrokes, they’re clearly students of the Top 40, and they’re more than capable of applying those lessons to their music. Title track “Infectious” possesses a chorus worthy of Christina Aguilera, a riff and backbeat straight from Billboard charts, and a glossy, star-quality performance by Walker. But he’s not completely Hollywood: the Legends frontman was originally a trumpeter in the act, and he never looks more comfortable than he does when he’s dancing with the rest of the brass section.

The Fackrell Brothers’s cinematic clip for “Infectious” shows off plenty of that pop-influenced choreography. Walker, trombonist Brian Robertson, and trumpeter Luis Beza keep their moves roughly synchronized, but loose enough to communicate self-awareness and good humor. The band plays in a brick room under warm, golden light; they perform “Infectious” with the sort of rock and roll glee that has made the Suburban Legends a must-see band. The rest of the clip is a rescue story: a Euro-looking baddie has abducted Vincent Walker’s girl. In a series of flashback cuts, we see her head-butt her adversary and race from his mansion, grab Walker, and leap for a getaway van. But the villain is in pursuit, and he brings his team of business-suited thugs to the Suburban Legends practice space. They line up behind him, the band follows suit behind Walker, and the battle begins!

We have long admired Suburban Legends from afar, and are very appreciative of having the chance to be a part of their promotional team. We’ve got lots of Suburban Legends goodies here, including copies of Infectious and autographed posters, so let us know if you’d like some for on-air giveaways. And true to form, the band will be on tour for much of the fall, so please let us know if you’d like to catch up with them for a video interview when they come to your town. If you need more info, call Andy Gesner at 732-613-1779 or e-mail us at info@HIPVideoPromo.com.