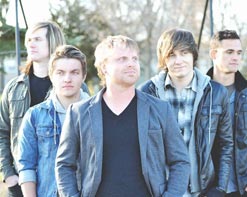 Since we’ve begun working with the Summertime Dropout crew we’ve seen them grow from an upstart pop punk outfit into a finely tuned songwriting and rocking machine. “Full Time Cutie” was an irreverent offering of young love and not taking themselves too seriously. They then followed up with the nostalgia-inducing “1999,” a song that harkens back to a more innocent time of life and is still a song we consider to be one of the best rock songs we’ve heard in years. For their newest single “Young and Dumb,” from their new album No Diving!, they’ve combined the introspection and the lightheartedness into one powerful number.

“Young and Dumb” cuts right to the chase with its message and lyrics; sometimes we all feel like Peter Pan drifting away from Neverland and we’re crying out to Wendy to grab our hand. This isn’t to say that this is a band living in the past, rather accepting that they are growing up and someday growing old, but that they never want to lose the innocence and spontaneity that we so cherish in our youth that too many of us aren’t able to hold onto.

The video is set on a fancy golf course with the boys of Summertime Dropouts dressed up in their best throwback country club outfits for hitting the links. Think Ben Hogan in the 19050’s. Since they’re not exactly naturals, the boys struggle for a bit to find their groove, with many a club and ball lost in the chaos. But it’s no sweat off their backs, they’re just having a good time, and with the encouragement of a particular super fan, they find their game. Maybe they’re young, and maybe they’re being a little stupid, but you know what? The fun pays off and the balls starting finding there ways into the cup! Dave even manages to knock off a hole-in-one! While maybe it’s a little unconventional, but they’re having fun and it works! Never grow up, guys!

Many of you have supported Summertime Dropouts already, but if you haven’t yet, don’t mess around and get on board this train! We’re psyched to be working with the band once again, so please get in touch to let us know what we can do on our end to help get this video into your programming. You can contact Andy Gesner and the HIP Video Promo crew at (732)-613-1779 or email us at info@HIPVideoPromo.com .