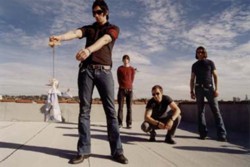 Hello programming friends, it’s Andy Gesner and the staff from HIP Video Promo and I’m extremely humbled to be able to continue to send you the best and brightest on the indie rock cutting edge. Today, it’s our pleasure to introduce you to the ironically-named Sunshine, an edgy, inventive PIL style retro darkwave, garage rock energy band that’s getting raves on both sides of the Atlantic. From their look and sound, you might easily mistake them for a group from Brooklyn, London, or Los Angeles. But Sunshine hails from the Czech Republic – and is poised to be one of the first Central European bands to make a big splash stateside.

It helps that so many of their influences will be more than familiar to American rockers. Brought up on The Cure, Nine Inch Nails, PiL and British new wave, singer and guitarist Kay (pronounced K-eye) has developed a sound heavily informed by Eighties sources, yet barbed and jagged enough to snare modern listeners used to the rougher stuff. Kay himself cuts a compelling figure – tall and wiry, sinewy and hard-eyed, regal, maybe a little menacing. Backed by a stylish band with over a decade’s worth of international touring experience, Kay and Sunshine certainly look the part of veteran transatlantic rock stars.

Moonshower And Razorblades is the fourth album released by the quartet, and the first LP since the heralded Necromancein 2001. (The stopgap Hysterical Stereo Loops, Beasts & Bloody Lips collection, put out in 2003, gathered together the Sunshine’s early and hard-to-find work for the benefit of the band’s growing fanbase.) While Sunshine uses loops, synthesizers, and drum programs, their gadgetry and ear candy is always placed squarely in the service of the song. Kay’s guitar is often the dominant instrument – even when its signal is processed so wildly that it sounds like a berserk synth!

The typical Sunshine song welds an infectious melody to a throbbing bass and drum groove, and adds intriguing synth coloration and dark lyrics about sex, addiction, and altered states. “Victim Is Another Name For Lover” reads like a compendium of Kay’s obsessions: the pain of love and sex, the desperation behind the desire, the ugliness of surrender. Kay may be playing master and servant, but where David Gahan acquiesced in the logic of domination and cruelty, Sunshine kicks back.

The Sunshine frontman dominates the clip for “Victim Is Another Name For Lover,” swaying, gyrating, and sneering at the camera in defiance. His bandmates are comparably kinetic: they stalk the white room in which they perform like caged tigers. It’s a performance clip, but it’s a non-realist one – most of the video is shot in washed-out color, and the bandmembers’ silhouettes are thrown in sharp relief against the bright white background.

The video is illustrated; tattooed. Black “ink” splatters across the frames in random patterns, and oozes down from the top of the screen. Racing stripes shoot out across the white backdrop, and bend at angles that give the room an illusory dimensionality. When they switch, recombine, and change direction, the dimensionality wobbles, too; it’s destabilizing, uneasy. Toward the end of the clip, huge swathes of the screen are filled in solid color. The band members dodge and dart around the stripes and solids, appearing first in front of the color, then behind it. These subjects are fragmented, distended, set adrift in a conceptual space with no bottom and top, and no edges other than those they make with their own sound.

Here at HIP we’re always excited to be championing international artists, particularly those as worthy as Sunshine. Thanks to Gregg Allen at Custard Records and Daniel House at Tsunami Entertainment for allowing HIP to share Sunshine with you. We have a large supply of Moonshower And Razorblades CDs for on air giveaways. The band will be playing in the US this spring, and if you’d like a video interview or video ID when they hit your market, we’d be thrilled to set it up. This is a must see live band! They will also be appearing at SXSW, which I am personally looking forward to in a big way. If you need more info, call Andy Gesner at (732) 613-1779, or email info@hipvideopromo.com.