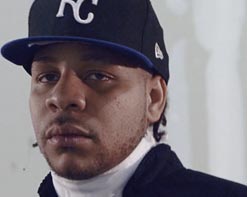 From the Kansas City Soul of the Hood tapes to his upcoming endeavor The Soul Food Trilogy, Suspect has become one of hip-hop’s most influential underground artists. Positioning himself for stardom, this unique all-star proved himself by selling self-made CDs to support his move to Orlando, Florida. Years of what Suspect deemed failure ridden brought this budding star to life, and awakened his creative drive.

In and out of the studio during countless nights has brought Suspect to where he currently resides. His anticipated new album The Soul Food Trilogy, which is to be presented in three parts: The Appetizer, The Entrée, and Dessert, is to be introduced this Tuesday. In the meantime, HIP Video Promo is pleased to present the single “WWJD.”

Viewers are forced to think deeply in this riveting clip as Suspect creates a demanding and passionate persona. “WWJD” finds Suspect collaborating with dynamic lyricist and performer Dizzy Wright, known for his popular SmokeOut Sessions. Directed by B. Miller Videos and produced by Chris Mecca, Suspect reunites the virtuousness of classic, hip-hop lyrics with contemporary rhythm and beats. Smart and innovative, Suspect presents viewers with concepts and beliefs that hit home and establish a bond within the human race.

Suspect is currently performing shows, making music, and establishing a popular online presence. His latest video clip for the single “WWJD” excites and mesmerizes fans of contemporary hip-hop, and brings forth the reminiscent ideas of the past. For more information on this exciting new artist, please contact Andy Gesner and the HIP Video Promo staff at (732)-613-1779 or email us at info@HIPVideoPromo.com .