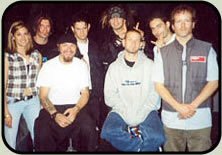 Here at HIP Video we are very excited and proud to announce that Switched, Virgin/Immortal’s breakthrough band of 2002 have quickly and impressively graduated from baby band status and are ripping up stages across the country with their unabashed rage and youthful exuberance. Due to the tremendous response Switched has been getting on the road and at radio, Immortal Records is ecstatic to announce that the Ohio based hard rock quintet has completed a brand new “concept clip” for their hit single “Inside”. The video was directed by top notch video visionary Gregory Dark and is riveting from start to finish. A far cry from the low budget aesthetic of their first video, this vid is jaw-dropping, must-see TV with the band showing off a new found confidence and creating an ambience within the video that is chilling and intriguing all at once.

“Inside” has been expertly remixed by Howard Benson (P.O.D., Crazy Town, Cold, Sepultura). The breakthrough video portrays a domestic squabble gone very wrong. The best part of the video is that the band explodes in forward motion while the viewer sees the altercation portrayed from the end result backwards! It’s the first video that is as disturbing (yet enjoyable) to watch in “rewind mode” as it is to watch in “play” mode! The band is fully able to display their chops and prove beyond a shadow of a doubt that that band has the “hooks” and the “looks” to break it wide open this summer!