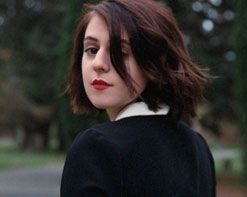 Tancred’s Jess Abbott already had a wealth of inspiration and experience before even beginning to write the new album, Out of the Garden. Between being a member of beloved indie darlings Now, Now, and already having two Tancred records under her belt, she is in a constant state of refining her skills as a songwriter with infectious, catchy, straightforward, gritty rock tunes.

For the first single, “Bed Case,” Abbott and her bandmates, Kevin Medina and Terrence Vitali, deliver in a big way. The song has an unmistakable, gritty forward momentum, but it’s way smarter than just a stock indie rock tune. Throw in a few extra beats and measures here and there, a sprinkling of locked in riffs, and melodies that would make any aspiring writer envious, and there’s no escaping the excellence of Tancred. We’re not alone in our praise, either. NPR says “Out of the Garden is just phenomenal” and THE FADER praises Abbott’s vocals that “sound like the sweetest, chewiest, most long-lasting bubblegum.”

“Bed Case” is a video that encapsulates everything we love about indie rock. Shot in a 4×3 aspect ratio, there’s an engaging energy and an irreverence to this video. It stuffs itself full of fun, creative visuals that harkens back to the days of 120 Minutes and the early Seattle explosion. Whether it be a group of seniors having a dance party in the basement with the strobe light blasting, a few rambunctious youths running amok in the streets with smoke bombs, or just Jess & co. rocking out in a plethora of lighting, this video is fun. Plain and simple.

We’ve got copies of Out of the Garden available thanks to good people at Polyvinyl Records and the band is also doing a handful of tour dates in June so get at us quick if you want to try to catch them in your market! Please contact Andy Gesner and the HIP Video Promo team at (732)-613-1779 or email info@HIPVideoPromo.com. You can also visit www.TancredMusic.com or www.PolyvinylRecords.com for more info on Tancred.