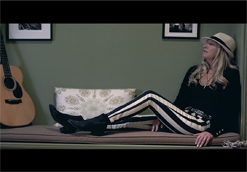 Like Van Gogh’s Arles, the Hamptons have always been a place artists seek retreat. Taylor Barton is one of those artists: she’s drawn to the quality of the light that impresses the muses – a place unlike anywhere else in the world. She’s been deeply involved in the arts scene on Eastern Long Island for years, where she’s distinguished herself as a singer-songwriter, producer, and filmmaker. She’s made her home in picturesque Amagansett, and in the video for “House Of Light”, she’s opening the doors and letting you in.

Even if you’ve never been to the Hamptons, there’s a pretty good chance that you’re aware of Taylor Barton’s work. She’s the director behind the well-loved rockumentary 50 Watt Fuse, an exploration of the career of the legendary sideman (and former Saturday Night Live bandleader) G.E. Smith. Smith also happens to be Barton’s partner, and he’s one of many talented musicians who play on House Of Light, the singer-songwriter’s tenth album. Grammy-winning bluegrass artist Sarah Jarosz and folk singer Jenni Muldaur joined her, and Tony Shanahan (Patti Smith’s sideman) produced this searing collection. Over the years, many notable performers have expressed admiration for Barton’s recordings, including Edie Brickell, Paula Cole, and Rosanne Cash. She’s been praised by Vanity Fair and Rolling Stone, who wrote, “she seeks beauty and grace in a sullied world.”

The magnetic clip for “House Of Light” is a look inside Taylor Barton’s world. Director Fabian Rodriguez takes us outside as well, where he escorts us along the pier, captures a Long Island sunset and the Atlantic Ocean waves, and treats us to a shot of the Montauk lighthouse. Superimposed on some of the frames are illustrations of seahorses, flowers, lanterns, and girls in blue dresses. These are translucent, of course – but convey Barton’s ability to write eloquent lyrics such as, “I will wait like a sunflower, on an August day in a passing shower.”

We’re delighted to work with Taylor Barton to promote the video for “House Of Light”! We’d love to see this video added into your regular programming and online presentations in a timely fashion, so please check it out as soon as you can. Rest assured we’ll have plenty of Taylor Barton merch available for on-air contests and giveaways, so don’t hesitate to get in touch. For more information on Taylor Barton, please contact Andy Gesner and the HIP Video Promo team at (732)-613-1779 or email us at info@HIPVideoPromo.com. You can also visit www.taylorbarton.com for more info.