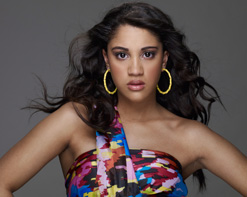 Howdy programmers! It’s time to wake up from the stormy gloom of September and get a loud, edgy injection of pop music you can really sink your teeth into. Taylor Bright is a young eighteen year old singer songwriter ready to captivate the dance floor with her polished hit “Psycho.” Laced with fuzzy warm synth, big beats, precise choreography, and enough relationship drama to steal away your attention, this video has all the right stuff to be a massive teen scene club rocker.

Although Taylor is only eighteen, the Philadelphia native has come a long way as both a singer and a songwriter. This rising star was only fifteen when she acquired an enthusiastic online following, reaching close to 150,000 views on YouTube (a massive accomplishment considering YouTube usage at the time). With a youthful style of pop-rock; her song “Striped Socks” was a success in the teen market and made its presence felt on Billboard’s dance charts. But artists grow and evolve, and Taylor’s music has matured considerably since then, taking on a mainstream urban dance-pop sound that will resonate with any Rihanna or Ke$ha fan immediately. This accomplished songstress has a long list of theatrical credits as well, ranging from a national tour as part of a 30th anniversary production of “Annie” (she appears on the 2008 cast recording) to local Philadelphia productions of “Annie Warbucks,” “13: the Musical” and Rodgers & Hammerstein’s “Carousel.” Taylor has also appeared in many commercials, performed the National Anthem at Madison Square Garden, and toured throughout the States and in the UK.

“Psycho” is the leading single from Taylor’s upcoming, yet to be titled, EP produced by ROBOPOP, famed for his production work with Gym Class Heroes, Maroon 5, Neon Hitch, and Cash Cash. Contrasting with the youthful pop-rock of “Striped Socks, “Psycho” features a driving beat that is ready for the dance floor and has that edgy urban attitude that will resonate loudly across the teen and mainstream markets. The song is covered with a razor sharp synthesizer scratching away at the instantly memorable vocals. The lyrics are not only memorable, but instantly relatable, as the young singer laments her affection for bad boys that end up on the wrong side of sanity. Knowing that star power doesn’t come from solidarity, Taylor rolls with a synchronized posse that dances along with her as she traverses campus hallways and a theater stage. Like every “normal” psycho boyfriend, Taylor’s guy stalks her the whole way through in sinister, yet always alluring, GQ-style fashion. At it’s core, the video and song deliver a strong message about the seriousness of being a young woman and the potential problems with stalking. Taylor herself say “Stalking is really another way of bullying, and that’s so relevant to what we hear more about in the media, especially cyber-bullying. That, combined with the energy in the song, it’s a great message to get out to both guys and girls. There are psychos out there and you need to be careful. You are not alone in this situation.” But through it all, this clip is always upbeat and never loses its feel-good quality, letting Taylor Bright shine in every frame.

We are thrilled to bring you a young artist that has a knock for pop very rarely found at her age, if at all! We know that anyone in the pop and teen demographic will be singing this song in their sleep from the moment they hear it. We’d love to hook you up with some cool Taylor Bright swag (including wristbands, posters and sunglasses), so be sure to reach out to get some for yourself and your viewers. If you need more info, call Andy Gesner at 732-613-1779 or e-mail us at info@HIPVideoPromo.com.