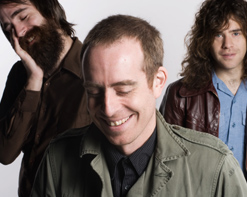 Howdy to all of our dear friends in the music video universe! It’s Andy Gesner and the HIP staff with yet another great clip for you and your viewers’ enjoyment. This time, we’re excited to be bringing you the terrific – and much-anticipated – new clip from one of indie music’s brightest stars and most uncompromising voices. We’ve been Ted Leo fans since his days fronting Chisel, the heralded garage rock band that spawned countless imitators across the Garden State and beyond. Since Leo went solo, his influence has only grown: he’s now loved and respected by hardcore punks, indie rockers, progressive folkies, and devotees of sophisticated singer-songwriter music alike. Not many latter-day punks have the melodic gifts or lyrical acumen to merit comparisons to The Clash or Elvis Costello. But about Ted Leo there has never been any question. Ever since the 2001 release of The Tyranny Of Distance, reviewers have hailed his releases as classics, punks have raved about his incendiary live shows, and the guardians of the rock and roll canon have welcomed him to the ranks of major songwriters.

Leo hasn’t rested on his laurels. With each release, his version of punk has grown more harmonically sophisticated and soulful, and his lyrics have grown more economical, more direct, and more persuasive. In particular, Leo’s political outrage has sharpened and deepened: these days, when he takes on a subject, he does so with great wit and moral authority. “Bomb. Repeat. Bomb”, the lead single from the upcoming Living With The Living, is a heartfelt anti-war song – but it’s also much more than that. Leo tries to get into the heads of the pilots who execute aerial bombing runs, and his condemnation of military aggression does not interfere with his ability to embody their perspective. Half-singing and half-declaiming, Leo leads The Pharmacists through a sinuous punk rock verse before hammering his way through in infectious refrain. “At press time”, raves an awed Pitchfork, “this stands as Ted Leo’s most vitriolic performance to date.”
In the provocative clip for “Bomb. Repeat. Bomb”, a team of young adults dressed in ski hats and winter jackets walk in loose formation on a city street. Each holds a cardboard placard under his or her arm. There’s nothing particularly military about the gait of these sixteen people – but when they come together, they stand in tight formation, and hoist the cards over their heads as one. The sixteen posters form a single image – and then they all flip together, as fans of a football team might, and the image changes to something else. Are they signaling to bomber planes, making a target, trying to send a message, or just flipping the bird?

“Bomb. Repeat Bomb” is more than just an argument against the Iraq War: it’s a broadside against a peculiarly American style of fighting from afar and ignoring the consequences. To make his point, Leo turns the sixteen cardboard surfaces into a single screen, and projects images of Eisenhower and Dulles, Central American desaparecidos and Guatemalan regulars. (The artificial canvas also broadcasts footage of Ted Leo and the Pharmacists in action, which is combat rock of a different kind.) It’s a grim reminder of the U.S.’s role in the overthrow of Jacobo Arbenz and other Latin American democrats by C.I.A.-backed forces. In one bracing sequence, a bomber soars through a mountain pass, and empties its payload onto virgin jungle. It’s affecting, but perhaps not quite as telling as the footage of a single bomb, captured on a single placard, its holder slowly backpedaling as it falls.

It’s always great to work with the wonderful Sara Tolbert and the rest of the crew at Touch and Go Records, and we owe them many thanks for giving us a slot on their team for this one. We’ll have copies of Living With The Living for your giveaway needs, so drop us a line! Ted Leo & The Pharmacists are also currently on tour, and we’d be happy to set up a video interview or ID when they visit your area. If you need more info call Andy Gesner at 732-613-1779, or email info@HIPVideoPromo.com. You can also visit www.TGRec.com, or www.TedLeo.com to find out more about Ted Leo & The Pharmacists.