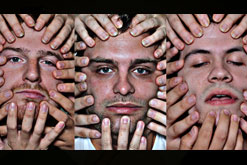 Greetings Programmers! It’s Andy Gesner and the HIP Video Promo crew to inject you with a full dose of weird. It’s safe to say that Tera Melos are no rookies when it comes to delivering the strange and bizarre, which they turn up a notch or ten in their brand new videos for “Frozen Zoo” and “The Skin Surf.”

Tera Melos take their brand of math rock into waters the band hasn’t charted before for the “Frozen Zoo” video. The band thrives on the unexpected and here a man, or rather a shadow of a man, or rather the imprint of a shadow of a man substituted by a portal into another universe walks the streets dancing to the crazy time signatures of the tune. This is the closest Tera Melos has ever been to writing a pop song and it finally evolves and flowers towards the climactic finale. However, to call this a pop song would be to give it a life sentence and throw it into solitary confinement. Tera Melos know that their strength lies in crossing every boundary and ignoring every rule in the book. For someone unfamiliar with the group, “Frozen Zoo” is a great way to enter their world, and for those who have heard this band before, it is another solid addition to the repertoire.

The band raises the bar even further on their completely eclectic clip for “The Skin Surf.” The video is humorously set in 1995 and twitches through the scenes as if gasping for its last breath in the midst of a convulsion. As random and disjointed as this clip and song seem, it is just a distraction to keep you off your guard as the song resolves in a moment of clarity in the end. Think of the moments leading up to the final chorus as a whiff of coffee before the sweet scent of perfume. Whether you are on a late-night exploration of the senses or just need a midday break from the ordinary, Tera Melos are your poison.

Both of these clips are off the band’s latest release, Patagonian Rats. The new record is a hit with the fans and the critics, alike. Absolutepunk.net gave the disc a warm 88% and claims that it is a “headcase of sheer joy and excitement,” while Wired.com stands by the fact that “Patagonian Rats is the type of album that sticks with you.” The record is now available online and in stores from Sargent House.

We are thrilled to team up with Sargent House in bringing something completely fresh from the oven to your doorstep. We’ve got plenty of copies of Patagonian Rats here for giveaways or your personal consumption. If you need more info, call Andy Gesner at 732-613-1779 or e-mail us at info@HIPVideoPromo.com. You can also visit www.TeraMelos.com and www.SargentHouse.com to find out more about Tera Melos.