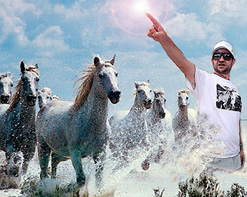 Way back in 2009, we passionately championed Vulture Whale into the spotlight of the indie rock scene with their “Sugar” video. Now, it’s our pleasure to once again be working with Vulture Whale’s frontman Wes McDonald on his eclectic new project and alter-ego, Terry Ohms. With his new “Ghost” and “Let’s Go Meet The Neighbors” videos, he is able to showcase just how far he has traveled on the winding road that is his career.

Terry Ohms started as a side project to Vulture Whale, who were early leaders in the burgeoning Birmingham, Alabama underground scene. With a new wave of creativity crashing within him, McDonald put forth his first solo effort: Terry Ohms Plays Wes McDonald. Cleverly using his alter-ego as a character in his musical legacy, Wes McDonald instantly became Terry Ohms. Ohms would go on to release two records over the next few years: Terry Ohms Gets Emotional EP and Terry Ohms – What Do You Mean, What Do I Mean?.

“Ghost” is the first single off Ohms’ wonderfully crafted new EP, A Lot More Than Enough, due October 13th, 2017. The otherworldly “Ghost” clip shows Ohms dancing freely with a bike helmet on (safety first!) while the world around him spins wildly. As the song progresses, it seems Ohms is battling the world around him, all while losing himself in the track. Oh yeah, and the whole video is in negative coloration, adding a super trippy vibe to the project.

“Let’s Go Meet The Neighbors” is Terry Ohms’ second single off the new EP. For this tune, Ohms offers a bopping, self-described “EDM Short”, where he shows off a new side to his identity. This song follows the underlying psychedelic imagery and negative coloring found in the aforementioned, “Ghost” video, while mixing things up with shots of him underwater, flashes of his dog, and upside-down shots of the road.

The “Ghost” and “Let’s Go Meet The Neighbors” music videos are the product of a career-long evolution for this musical tsunami, and we are truly honored to have Wes back in the fold. We’d love to get you involved with everything Terry Ohms, so don’t hesitate to let us know what we can do on our end to make that happen. Please contact Andy Gesner and the HIP Video Promo team at (732)-613-1779, email us at info@HIPVideoPromo.com or visit www.TerryOhms.com for more info on Terry Ohms.