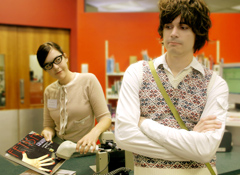 Howdy music video aficionados! It’s Andy Gesner and the incredible staff from HIP Video Promo bringing you another must see video from our friends at Sub Pop! “It’s no secret when I sing”, confessed The Brunettes on 2002’s memorable Holding Hands, Feeding Ducks, “I like to sound American”. This fetching New Zealand combo knows our pop history better than we do – echoes of Phil Spector, The Archies, Carole King, and countless U.S. bubblegum combos are present in their music. But The Brunettes don’t spin candyfloss: their latest single drew (wholly merited) comparisons to the Polyphonic Spree. Over three albums and several EPs, singer-songwriters Jonathan Bree and Heather Mansfield have fabricated their own Wall Of Sound, filled with reverbed guitars, wind instruments, glockenspiel, electric piano, breezy harmonica, synths, horns, warm echoes.

And voices – lots of voices. Mansfield and Bree have the sort of voices that ache to be paired, and when they are, it often feels as if the entire underground is singing at once. They trade lyrics, respond to each other, carry on an ongoing conversation, fill every groove of their recordings with their outsized personalities. Indie stars Down Under, The Brunettes have begun to achieve similar recognition in North America. They’ve toured the U.S. with the Shins, and they’ve also supported Rilo Kiley, The Postal Service, and Clap Your Hands Say Yeah. Back home, the combo has demonstrated an ability to move giant crowds: they’ve played their widescreen indiepop at the massive Big Day Out summer festivals. The Brunettes’s music may feel intimate, but they’ve got a sound – and a style – big enough for the grand stage.

Structure And Cosmetics is the most musically-accomplished set they’ve ever cut: ten cinematic songs, brilliantly arranged and energetically performed. “Brunettes Against Bubblegum Youth (BABY)” is the kickoff, and its infectious melody and clever lyrics set the tone for the rest of the album. It’s also one of the few pop numbers in recent memory to feature a prominent clarinet part – Mansfield wails along on her woodwind during the song’s glorious instrumental release.

The image of Heather Mansfield and her clarinet is a central one in the “Brunettes Against Bubblegum Youth (BABY)” clip. The eye-catching frontwoman toots her horn with black-and-white striped gloves on; it’s fascinating and fashionable! The Brunettes are, without a doubt, one of the best-dressed bands in indiepop, and their remarkable (but never kitchy) Sixties-inspired wardrobe is on bold display here. Jonathan Bree looks sharp in a black and white striped sweater that matches both his hollow-bodied guitar and Mansfield’s gloves; the frontwoman alternates between an elegant and striking black dress and a floral-print shirt. The band performs in front of swirling pastel backdrops; at times, they seem to be dancing on soundwaves.

Elsewhere, a group of innocent-looking (but attractive) teenage girls gather in a pink living room to play a Brunettes boardgame. The game itself looks like something out of the early Seventies – the board, the colors, the font on the playing cards – “date” the scene at once. The girls play along: they behave with the wide-eyed joy and mystification so characteristic of television commercials of that era. One by one, they open up little plastic doors (each marked with a tempting “?”) on the gameboard to discover a member of the Brunettes in action. Each “piece” is extracted and placed on the board by a nail-polished hand; there, the miniature Brunettes move from space to space, singing their song as they do.

Lacey Swain, Megan Jasper and the fine folks at Sub Pop have been kind enough to hook us up with lots of copies ofStructure And Cosmetics for your on-air giveaway needs so please reach out if you’d like to get some. We’re here to do whatever it takes to keep this video’s airplay at a maximum! If you need more info call Andy Gesner at 732-613-1779, or email info@HIPVideoPromo.com. You can also visit www.SubPop.com, or Bandcamp to find out more about The Brunettes.