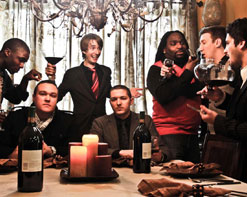 In the world of musicians and music listeners, there exist infinite amounts of creative collaborations. Here at HIP Video Promo, the staff and Andy Gesner are pleased to be introducing an exciting new band called The Canal. We are honored and thrilled to be presenting their first music video for their debut single “Lemons.” Fused together by an incredible blend of hip hop and pop rock, the music of The Canal successfully adhere to the balance between a multitude of genres and will leave you stuck in the hopes of hearing more of their music.

The Canal got together when music enthusiasts and best friends, Blake and Shy, decided that they wanted to start a band with a different sound. Built around one of the most distinct places in Indianapolis, where many local couples go to walk and hold hands, The Canal decided to join together to make music that excites and evokes lovers and friends of every kind. Through their ability to make waves throughout an ocean of music, their songs captivate the audience with upbeat and influential lyrics. With sounds of other artists, such as Lupe Fiasco, the Gym Class Heroes, and N.E.R.D., the band consists of dedicated musicians who take themselves seriously, but just want to show the world a good time.

With their new video for “Lemons,” you will find yourself smiling along to the lyrics and melodies of the song in more ways than one. The song combines elements of rap, hip hop, alternative rock, and pop rock that make up for all of the band’s influences. It is easy to hear the vast amount of commitment, brotherhood, and friendship that exists between the musicians of The Canal. The guitar riffs and background vocals are a standing ground for the main vocals, which leave you in a sense of happy wonder. The cello also gives the music a romantic feel, and although many artists have tried to complete collaborations such as this, it is clear that the music of The Canal are wondrous in fun and successful ways. Through their own style and creative sense of musicianship, the video and song for “Lemons” grasps the belief of the idea that we only live once.

At HIP Video Promo, we are proud to be introducing a band that holds true to their dream of doing what they’ve always wanted to do. The Canal presents us with a storyline and a soundtrack for the every day lives of every day people, which leave us inspired and a bit breathless. Even though musicians bombard us with overwhelming ideas and unsung melodies, The Canal pushes away the anxiety of underdevelopment and puts an entire plate of music on the table. Their capability to join all sorts of different genres into one creative and elemental type of sound makes them a strong and encouraging group of talented musicians. If you need more info you can contact Andy Gesner at (732)-613-1779 or email us at info@HIPVideoPromo.com . You can also visit Facebook for more information about The Canal.